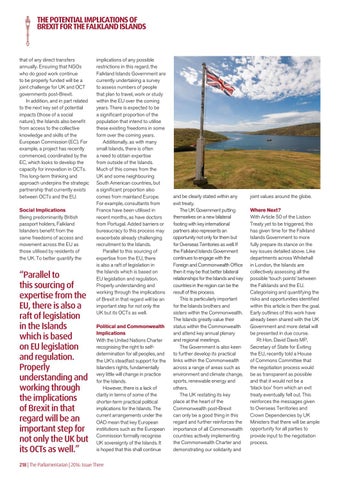 THE POTENTIAL IMPLICATIONS OF BREXIT FOR THE FALKLAND ISLANDS

that of any direct transfers annually. Ensuring that NGOs who do good work continue to be properly funded will be a joint challenge for UK and OCT governments post-Brexit. In addition, and in part related to the next key set of potential impacts (those of a social nature), the Islands also benefit from access to the collective knowledge and skills of the European Commission (EC). For example, a project has recently commenced, coordinated by the EC, which looks to develop the capacity for innovation in OCTs. This long-term thinking and approach underpins the strategic partnership that currently exists between OCTs and the EU. Social Implications Being predominantly British passport holders, Falkland Islanders benefit from the same freedoms of access and movement across the EU as those utilised by residents of the UK. To better quantify the

“Parallel to this sourcing of expertise from the EU, there is also a raft of legislation in the Islands which is based on EU legislation and regulation. Properly understanding and working through the implications of Brexit in that regard will be an important step for not only the UK but its OCTs as well.”

implications of any possible restrictions in this regard, the Falkland Islands Government are currently undertaking a survey to assess numbers of people that plan to travel, work or study within the EU over the coming years. There is expected to be a significant proportion of the population that intend to utilise these existing freedoms in some form over the coming years. Additionally, as with many small Islands, there is often a need to obtain expertise from outside of the Islands. Much of this comes from the UK and some neighbouring South American countries, but a significant proportion also comes from mainland Europe. For example, consultants from France have been utilised in recent months, as have doctors from Portugal. Added barriers or bureaucracy to this process may exacerbate already challenging recruitment to the Islands. Parallel to this sourcing of expertise from the EU, there is also a raft of legislation in the Islands which is based on EU legislation and regulation. Properly understanding and working through the implications of Brexit in that regard will be an important step for not only the UK but its OCTs as well. Political and Commonwealth Implications With the United Nations Charter recognising the right to selfdetermination for all peoples, and the UK’s steadfast support for the Islanders rights, fundamentally very little will change in practice for the Islands. However, there is a lack of clarity in terms of some of the shorter-term practical political implications for the Islands. The current arrangements under the OAD mean that key European institutions such as the European Commission formally recognise UK sovereignty of the Islands. It is hoped that this shall continue

joint values around the globe. Where Next? With Article 50 of the Lisbon Treaty yet to be triggered, this has given time for the Falkland Islands Government to more fully prepare its stance on the key issues detailed above. Like departments across Whitehall in London, the Islands are collectively assessing all the possible ‘touch points’ between the Falklands and the EU. Categorising and quantifying the risks and opportunities identified within this article is then the goal. Early outlines of this work have already been shared with the UK Government and more detail will be presented in due course. Rt Hon. David Davis MP, Secretary of State for Exiting the EU, recently told a House of Commons Committee that the negotiation process would be as transparent as possible and that it would not be a ‘black box’ from which an exit treaty eventually fell out. This reinforces the messages given to Overseas Territories and Crown Dependencies by UK Ministers that there will be ample opportunity for all parties to provide input to the negotiation process.