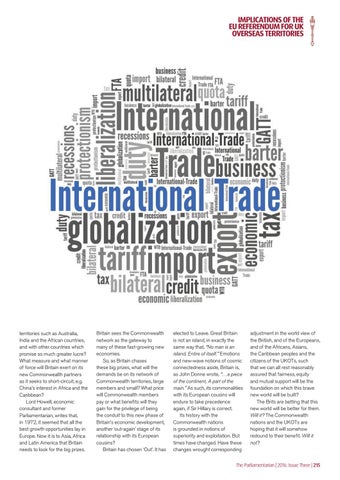 Implications of the EU referendum for UK Overseas territories

territories such as Australia, India and the African countries, and with other countries which promise so much greater lucre? What measure and what manner of force will Britain exert on its new Commonwealth partners as it seeks to short-circuit, e.g. China’s interest in Africa and the Caribbean? Lord Howell, economic consultant and former Parliamentarian, writes that, in 1972, it seemed that all the best growth opportunities lay in Europe. Now it is to Asia, Africa and Latin America that Britain needs to look for the big prizes.

Britain sees the Commonwealth network as the gateway to many of these fast-growing new economies. So, as Britain chases these big prizes, what will the demands be on its network of Commonwealth territories, large members and small? What price will Commonwealth members pay or what benefits will they gain for the privilege of being the conduit to this new phase of Britain’s economic development, another ‘out-again’ stage of its relationship with its European cousins? Britain has chosen ‘Out’. It has

elected to Leave. Great Britain is not an island, in exactly the same way that, “No man is an island, Entire of itself.” Emotions and new-wave notions of cosmic connectedness aside, Britain is, as John Donne wrote, “…a piece of the continent, A part of the main.” As such, its commonalities with its European cousins will endure to take precedence again, if Sir Hillary is correct. Its history with the Commonwealth nations is grounded in notions of superiority and exploitation. But times have changed. Have these changes wrought corresponding

adjustment in the world view of the British, and of the Europeans, and of the Africans, Asians, the Caribbean peoples and the citizens of the UKOTs, such that we can all rest reasonably assured that fairness, equity and mutual support will be the foundation on which this brave new world will be built? The Brits are betting that this new world will be better for them. Will it? The Commonwealth nations and the UKOTs are hoping that it will somehow redound to their benefit. Will it not?