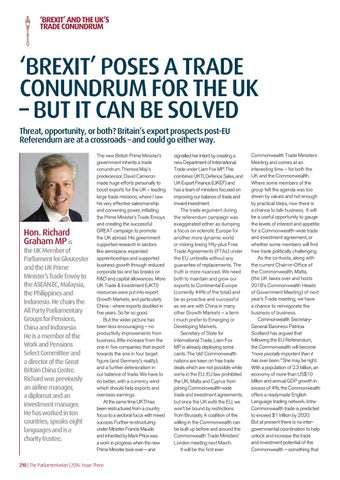 ‘Brexit’ AND the UK’s trade conundrum

‘Brexit’ poses a trade conundrum for the UK – but it can be solved Threat, opportunity, or both? Britain’s export prospects post-EU Referendum are at a crossroads – and could go either way.

the UK Member of Parliament for Gloucester and the UK Prime Minister’s Trade Envoy to the ASEAN EC, Malaysia, the Philippines and Indonesia. He chairs the All Party Parliamentary Groups for Pensions, China and Indonesia. He is a member of the Work and Pensions Select Committee and a director of the Great Britain China Centre. Richard was previously an airline manager, a diplomat and an investment manager. He has worked in ten countries, speaks eight languages and is a charity trustee.

The new British Prime Minister’s government inherits a trade conundrum. Theresa May’s predecessor, David Cameron made huge efforts personally to boost exports for the UK – leading large trade missions, where I saw his very effective salesmanship and convening power, initiating the Prime Minister’s Trade Envoys and creating the successful GREAT campaign to promote the UK abroad. His government supported research in sectors like aerospace, expanded apprenticeships and supported business growth through reduced corporate tax and tax breaks on R&amp;D and capital allowances. More UK Trade &amp; Investment (UKTI) resources were put into export Growth Markets, and particularly China - where exports doubled in five years. So far so good. But the wider picture has been less encouraging – no productivity improvements from business, little increase from the one in five companies that export towards the one in four target figure (and Germany’s reality), and a further deterioration in our balance of trade. We have to do better, with a currency wind which should help exports and overseas earnings. At the same time UKTI has been restructured from a country focus to a sectoral focus with mixed success. Further re-structuring under Minister Francis Maude and inherited by Mark Price was a work in progress when the new Prime Minister took over – and

signalled her intent by creating a new Department of International Trade under Liam Fox MP. This combines UKTI, Defence Sales, and UK Export Finance (UKEF) and has a team of ministers focused on improving our balance of trade and inward investment. The trade argument during the referendum campaign was exaggerated either as dumping a focus on sclerotic Europe for another more dynamic world or risking losing fifty-plus Free Trade Agreements (FTAs) under the EU umbrella without any guarantee of replacements. The truth is more nuanced. We need both to maintain and grow our exports to Continental Europe (currently 44% of the total) and be as proactive and successful as we are with China in many other Growth Markets – a term I much prefer to Emerging or Developing Markets. Secretary of State for International Trade, Liam Fox MP is already deploying some cards. The ‘old’ Commonwealth nations are keen on free trade deals which are not possible while we’re in the EU. EU law prohibited the UK, Malta and Cyprus from joining Commonwealth-wide trade and investment agreements, but once the UK exits the EU, we won’t be bound by restrictions from Brussels. A coalition of the willing in the Commonwealth can be built up before and around the Commonwealth Trade Ministers’ London meeting next March. It will be the first ever

Commonwealth Trade Ministers Meeting and comes at an interesting time – for both the UK and the Commonwealth. Where some members of the group felt the agenda was too driven by values and not enough by practical steps, now there is a chance to talk business. It will be a useful opportunity to gauge the levels of interest and appetite for a Commonwealth-wide trade and investment agreement, or whether some members will find free trade politically challenging. As the co-hosts, along with the current Chair-in-Office of the Commonwealth, Malta, (the UK takes over and hosts 2018’s Commonwealth Heads of Government Meeting) of next year’s Trade meeting, we have a chance to reinvigorate the business of business. Commonwealth SecretaryGeneral Baroness Patricia Scotland has argued that following the EU Referendum, the Commonwealth will become “more pivotally important than it has ever been.” She may be right. With a population of 2.3 billion, an economy of more than US$10 billion and annual GDP growth in excess of 4%, the Commonwealth offers a readymade English Language trading network. IntraCommonwealth trade is predicted to exceed $1 trillion by 2020. But at present there is no intergovernmental coordination to help unlock and increase the trade and investment potential of the Commonwealth – something that