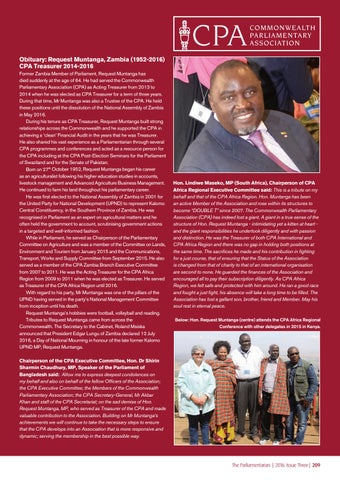 Obituary: Request Muntanga, Zambia (1952-2016) CPA Treasurer 2014-2016 Former Zambia Member of Parliament, Request Muntanga has died suddenly at the age of 64. He had served the Commonwealth Parliamentary Association (CPA) as Acting Treasurer from 2013 to 2014 when he was elected as CPA Treasurer for a term of three years. During that time, Mr Muntanga was also a Trustee of the CPA. He held these positions until the dissolution of the National Assembly of Zambia in May 2016. During his tenure as CPA Treasurer, Request Muntanga built strong relationships across the Commonwealth and he supported the CPA in achieving a ‘clean’ Financial Audit in the years that he was Treasurer. He also shared his vast experience as a Parliamentarian through several CPA programmes and conferences and acted as a resource person for the CPA including at the CPA Post-Election Seminars for the Parliament of Swaziland and for the Senate of Pakistan. Born on 27th October 1952, Request Muntanga began his career as an agriculturalist following his higher education studies in accounts, livestock management and Advanced Agriculture Business Management. He continued to farm his land throughout his parliamentary career. He was first elected to the National Assembly of Zambia in 2001 for the United Party for National Development (UPND) to represent Kalomo Central Constituency, in the Southern Province of Zambia. He was recognised in Parliament as an expert on agricultural matters and he often held the government to account, scrutinising government actions in a targeted and well-informed fashion. While in Parliament, he served as Chairperson of the Parliamentary Committee on Agriculture and was a member of the Committee on Lands, Environment and Tourism from January 2015 and the Communications, Transport, Works and Supply Committee from September 2015. He also served as a member of the CPA Zambia Branch Executive Committee from 2007 to 2011. He was the Acting Treasurer for the CPA Africa Region from 2009 to 2011 when he was elected as Treasurer. He served as Treasurer of the CPA Africa Region until 2016. With regard to his party, Mr Muntanga was one of the pillars of the UPND having served in the party’s National Management Committee from inception until his death. Request Muntanga’s hobbies were football, volleyball and reading. Tributes to Request Muntanga came from across the Commonwealth. The Secretary to the Cabinet, Roland Msiska announced that President Edgar Lungu of Zambia declared 12 July 2016, a Day of National Mourning in honour of the late former Kalomo UPND MP, Request Muntanga.

Hon. Lindiwe Maseko, MP (South Africa), Chairperson of CPA Africa Regional Executive Committee said: This is a tribute on my behalf and that of the CPA Africa Region. Hon. Muntanga has been an active Member of the Association and rose within its structures to become “DOUBLE T” since 2007. The Commonwealth Parliamentary Association (CPA) has indeed lost a giant. A giant in a true sense of the structure of Hon. Request Muntanga - intimidating yet a kitten at heart and the giant responsibilities he undertook diligently and with passion and distinction. He was the Treasurer of both CPA International and CPA Africa Region and there was no gap in holding both positions at the same time. The sacrifices he made and his contribution in fighting for a just course, that of ensuring that the Status of the Association is changed from that of charity to that of an international organisation are second to none. He guarded the finances of the Association and encouraged all to pay their subscription diligently. As CPA Africa Region, we felt safe and protected with him around. He ran a good race and fought a just fight, his absence will take a long time to be filled. The Association has lost a gallant son, brother, friend and Member. May his soul rest in eternal peace. Below: Hon. Request Muntanga (centre) attends the CPA Africa Regional Conference with other delegates in 2015 in Kenya.

Chairperson of the CPA Executive Committee, Hon. Dr Shirin Sharmin Chaudhury, MP, Speaker of the Parliament of Bangladesh said: Allow me to express deepest condolences on my behalf and also on behalf of the fellow Officers of the Association; the CPA Executive Committee; the Members of the Commonwealth Parliamentary Association; the CPA Secretary-General, Mr Akbar Khan and staff of the CPA Secretariat; on the sad demise of Hon. Request Muntanga, MP, who served as Treasurer of the CPA and made valuable contribution to the Association. Building on Mr Muntanga’s achievements we will continue to take the necessary steps to ensure that the CPA develops into an Association that is more responsive and dynamic; serving the membership in the best possible way.