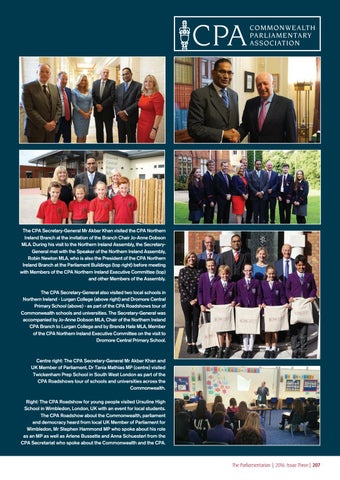 Centre right: The CPA Secretary-General Mr Akbar Khan and UK Member of Parliament, Dr Tania Mathias MP (centre) visited Twickenham Prep School in South West London as part of the CPA Roadshows tour of schools and universities across the Commonwealth. Right: The CPA Roadshow for young people visited Ursuline High School in Wimbledon, London, UK with an event for local students. The CPA Roadshow about the Commonwealth, parliament and democracy heard from local UK Member of Parliament for Wimbledon, Mr Stephen Hammond MP who spoke about his role as an MP as well as Arlene Bussette and Anna Schuesterl from the CPA Secretariat who spoke about the Commonwealth and the CPA.