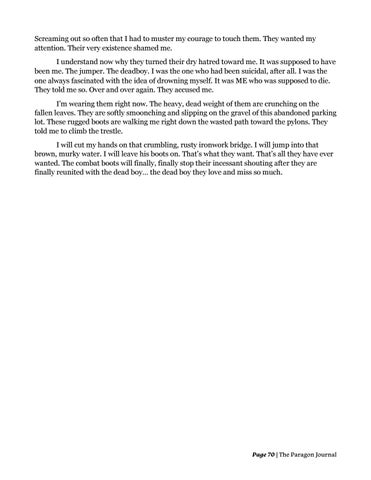 Screaming out so often that I had to muster my courage to touch them. They wanted my attention. Their very existence shamed me. I understand now why they turned their dry hatred toward me. It was supposed to have been me. The jumper. The deadboy. I was the one who had been suicidal, after all. I was the one always fascinated with the idea of drowning myself. It was ME who was supposed to die. They told me so. Over and over again. They accused me. I’m wearing them right now. The heavy, dead weight of them are crunching on the fallen leaves. They are softly smoonching and slipping on the gravel of this abandoned parking lot. These rugged boots are walking me right down the wasted path toward the pylons. They told me to climb the trestle. I will cut my hands on that crumbling, rusty ironwork bridge. I will jump into that brown, murky water. I will leave his boots on. That’s what they want. That’s all they have ever wanted. The combat boots will finally, finally stop their incessant shouting after they are finally reunited with the dead boy… the dead boy they love and miss so much.