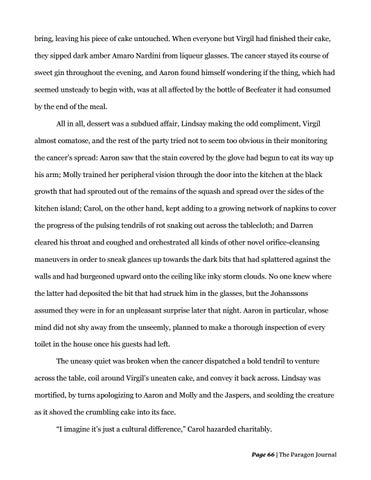 bring, leaving his piece of cake untouched. When everyone but Virgil had finished their cake, they sipped dark amber Amaro Nardini from liqueur glasses. The cancer stayed its course of sweet gin throughout the evening, and Aaron found himself wondering if the thing, which had seemed unsteady to begin with, was at all affected by the bottle of Beefeater it had consumed by the end of the meal. All in all, dessert was a subdued affair, Lindsay making the odd compliment, Virgil almost comatose, and the rest of the party tried not to seem too obvious in their monitoring the cancer’s spread: Aaron saw that the stain covered by the glove had begun to eat its way up his arm; Molly trained her peripheral vision through the door into the kitchen at the black growth that had sprouted out of the remains of the squash and spread over the sides of the kitchen island; Carol, on the other hand, kept adding to a growing network of napkins to cover the progress of the pulsing tendrils of rot snaking out across the tablecloth; and Darren cleared his throat and coughed and orchestrated all kinds of other novel orifice-cleansing maneuvers in order to sneak glances up towards the dark bits that had splattered against the walls and had burgeoned upward onto the ceiling like inky storm clouds. No one knew where the latter had deposited the bit that had struck him in the glasses, but the Johanssons assumed they were in for an unpleasant surprise later that night. Aaron in particular, whose mind did not shy away from the unseemly, planned to make a thorough inspection of every toilet in the house once his guests had left. The uneasy quiet was broken when the cancer dispatched a bold tendril to venture across the table, coil around Virgil’s uneaten cake, and convey it back across. Lindsay was mortified, by turns apologizing to Aaron and Molly and the Jaspers, and scolding the creature as it shoved the crumbling cake into its face. “I imagine it’s just a cultural difference,” Carol hazarded charitably. Page 66 | The Paragon Journal