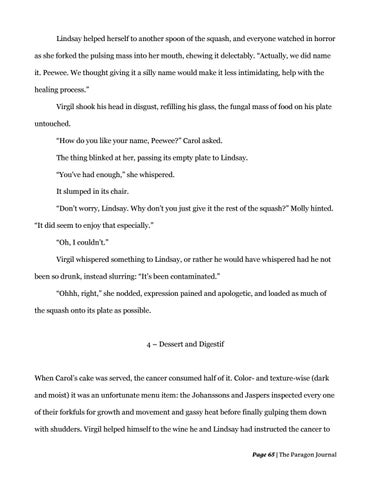 Lindsay helped herself to another spoon of the squash, and everyone watched in horror as she forked the pulsing mass into her mouth, chewing it delectably. “Actually, we did name it. Peewee. We thought giving it a silly name would make it less intimidating, help with the healing process.” Virgil shook his head in disgust, refilling his glass, the fungal mass of food on his plate untouched. “How do you like your name, Peewee?” Carol asked. The thing blinked at her, passing its empty plate to Lindsay. “You’ve had enough,” she whispered. It slumped in its chair. “Don’t worry, Lindsay. Why don’t you just give it the rest of the squash?” Molly hinted. “It did seem to enjoy that especially.” “Oh, I couldn’t.” Virgil whispered something to Lindsay, or rather he would have whispered had he not been so drunk, instead slurring: “It’s been contaminated.” “Ohhh, right,” she nodded, expression pained and apologetic, and loaded as much of the squash onto its plate as possible.

When Carol’s cake was served, the cancer consumed half of it. Color- and texture-wise (dark and moist) it was an unfortunate menu item: the Johanssons and Jaspers inspected every one of their forkfuls for growth and movement and gassy heat before finally gulping them down with shudders. Virgil helped himself to the wine he and Lindsay had instructed the cancer to Page 65 | The Paragon Journal