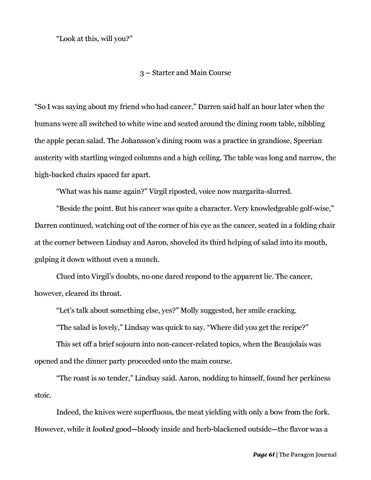 “So I was saying about my friend who had cancer,” Darren said half an hour later when the humans were all switched to white wine and seated around the dining room table, nibbling the apple pecan salad. The Johansson’s dining room was a practice in grandiose, Speerian austerity with startling winged columns and a high ceiling. The table was long and narrow, the high-backed chairs spaced far apart. “What was his name again?” Virgil riposted, voice now margarita-slurred. “Beside the point. But his cancer was quite a character. Very knowledgeable golf-wise,” Darren continued, watching out of the corner of his eye as the cancer, seated in a folding chair at the corner between Lindsay and Aaron, shoveled its third helping of salad into its mouth, gulping it down without even a munch. Clued into Virgil’s doubts, no one dared respond to the apparent lie. The cancer, however, cleared its throat. “Let’s talk about something else, yes?” Molly suggested, her smile cracking. “The salad is lovely,” Lindsay was quick to say. “Where did you get the recipe?” This set off a brief sojourn into non-cancer-related topics, when the Beaujolais was opened and the dinner party proceeded onto the main course. “The roast is so tender,” Lindsay said. Aaron, nodding to himself, found her perkiness stoic. Indeed, the knives were superfluous, the meat yielding with only a bow from the fork. However, while it looked good—bloody inside and herb-blackened outside—the flavor was a Page 61 | The Paragon Journal