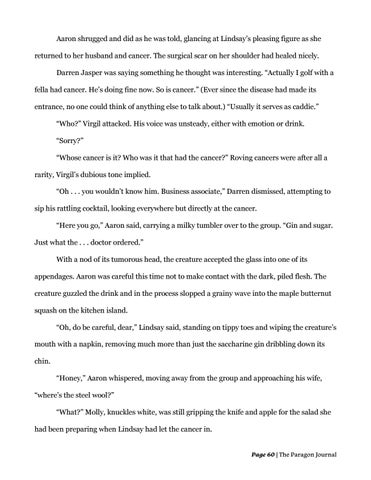 Aaron shrugged and did as he was told, glancing at Lindsay’s pleasing figure as she returned to her husband and cancer. The surgical scar on her shoulder had healed nicely. Darren Jasper was saying something he thought was interesting. “Actually I golf with a fella had cancer. He’s doing fine now. So is cancer.” (Ever since the disease had made its entrance, no one could think of anything else to talk about.) “Usually it serves as caddie.” “Who?” Virgil attacked. His voice was unsteady, either with emotion or drink. “Sorry?” “Whose cancer is it? Who was it that had the cancer?” Roving cancers were after all a rarity, Virgil’s dubious tone implied. “Oh . . . you wouldn’t know him. Business associate,” Darren dismissed, attempting to sip his rattling cocktail, looking everywhere but directly at the cancer. “Here you go,” Aaron said, carrying a milky tumbler over to the group. “Gin and sugar. Just what the . . . doctor ordered.” With a nod of its tumorous head, the creature accepted the glass into one of its appendages. Aaron was careful this time not to make contact with the dark, piled flesh. The creature guzzled the drink and in the process slopped a grainy wave into the maple butternut squash on the kitchen island. “Oh, do be careful, dear,” Lindsay said, standing on tippy toes and wiping the creature’s mouth with a napkin, removing much more than just the saccharine gin dribbling down its chin. “Honey,” Aaron whispered, moving away from the group and approaching his wife, “where’s the steel wool?” “What?” Molly, knuckles white, was still gripping the knife and apple for the salad she had been preparing when Lindsay had let the cancer in. Page 60 | The Paragon Journal