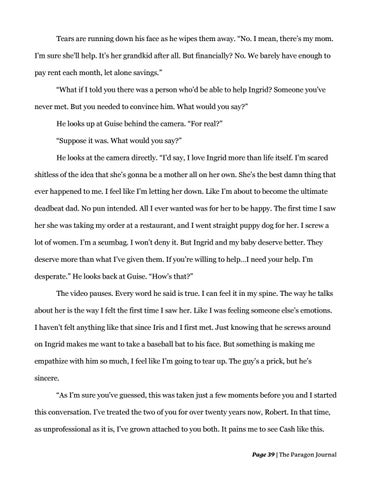 Tears are running down his face as he wipes them away. “No. I mean, there’s my mom. I’m sure she’ll help. It’s her grandkid after all. But financially? No. We barely have enough to pay rent each month, let alone savings.” “What if I told you there was a person who’d be able to help Ingrid? Someone you’ve never met. But you needed to convince him. What would you say?” He looks up at Guise behind the camera. “For real?” “Suppose it was. What would you say?” He looks at the camera directly. “I’d say, I love Ingrid more than life itself. I’m scared shitless of the idea that she’s gonna be a mother all on her own. She’s the best damn thing that ever happened to me. I feel like I’m letting her down. Like I’m about to become the ultimate deadbeat dad. No pun intended. All I ever wanted was for her to be happy. The first time I saw her she was taking my order at a restaurant, and I went straight puppy dog for her. I screw a lot of women. I’m a scumbag. I won’t deny it. But Ingrid and my baby deserve better. They deserve more than what I’ve given them. If you’re willing to help…I need your help. I’m desperate.” He looks back at Guise. “How’s that?” The video pauses. Every word he said is true. I can feel it in my spine. The way he talks about her is the way I felt the first time I saw her. Like I was feeling someone else’s emotions. I haven’t felt anything like that since Iris and I first met. Just knowing that he screws around on Ingrid makes me want to take a baseball bat to his face. But something is making me empathize with him so much, I feel like I’m going to tear up. The guy’s a prick, but he’s sincere. “As I’m sure you’ve guessed, this was taken just a few moments before you and I started this conversation. I’ve treated the two of you for over twenty years now, Robert. In that time, as unprofessional as it is, I’ve grown attached to you both. It pains me to see Cash like this. Page 39 | The Paragon Journal