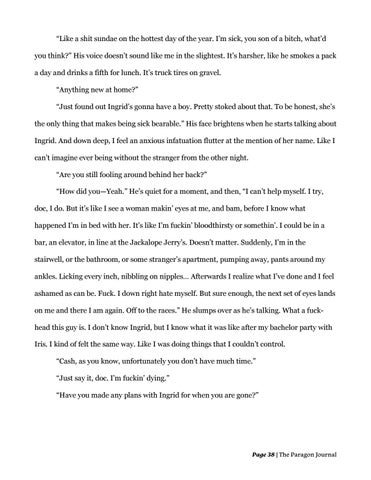 “Like a shit sundae on the hottest day of the year. I’m sick, you son of a bitch, what’d you think?” His voice doesn’t sound like me in the slightest. It’s harsher, like he smokes a pack a day and drinks a fifth for lunch. It’s truck tires on gravel. “Anything new at home?” “Just found out Ingrid’s gonna have a boy. Pretty stoked about that. To be honest, she’s the only thing that makes being sick bearable.” His face brightens when he starts talking about Ingrid. And down deep, I feel an anxious infatuation flutter at the mention of her name. Like I can’t imagine ever being without the stranger from the other night. “Are you still fooling around behind her back?” “How did you—Yeah.” He’s quiet for a moment, and then, “I can’t help myself. I try, doc, I do. But it’s like I see a woman makin’ eyes at me, and bam, before I know what happened I’m in bed with her. It’s like I’m fuckin’ bloodthirsty or somethin’. I could be in a bar, an elevator, in line at the Jackalope Jerry’s. Doesn’t matter. Suddenly, I’m in the stairwell, or the bathroom, or some stranger’s apartment, pumping away, pants around my ankles. Licking every inch, nibbling on nipples… Afterwards I realize what I’ve done and I feel ashamed as can be. Fuck. I down right hate myself. But sure enough, the next set of eyes lands on me and there I am again. Off to the races.” He slumps over as he’s talking. What a fuckhead this guy is. I don’t know Ingrid, but I know what it was like after my bachelor party with Iris. I kind of felt the same way. Like I was doing things that I couldn’t control. “Cash, as you know, unfortunately you don’t have much time.” “Just say it, doc. I’m fuckin’ dying.” “Have you made any plans with Ingrid for when you are gone?”