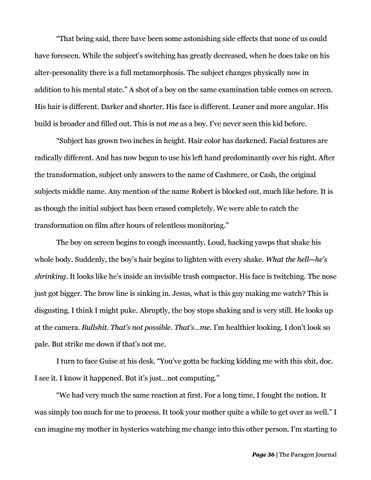 “That being said, there have been some astonishing side effects that none of us could have foreseen. While the subject’s switching has greatly decreased, when he does take on his alter-personality there is a full metamorphosis. The subject changes physically now in addition to his mental state.” A shot of a boy on the same examination table comes on screen. His hair is different. Darker and shorter. His face is different. Leaner and more angular. His build is broader and filled out. This is not me as a boy. I’ve never seen this kid before. “Subject has grown two inches in height. Hair color has darkened. Facial features are radically different. And has now begun to use his left hand predominantly over his right. After the transformation, subject only answers to the name of Cashmere, or Cash, the original subjects middle name. Any mention of the name Robert is blocked out, much like before. It is as though the initial subject has been erased completely. We were able to catch the transformation on film after hours of relentless monitoring.” The boy on screen begins to cough incessantly. Loud, hacking yawps that shake his whole body. Suddenly, the boy’s hair begins to lighten with every shake. What the hell—he’s shrinking. It looks like he’s inside an invisible trash compactor. His face is twitching. The nose just got bigger. The brow line is sinking in. Jesus, what is this guy making me watch? This is disgusting. I think I might puke. Abruptly, the boy stops shaking and is very still. He looks up at the camera. Bullshit. That’s not possible. That’s…me. I’m healthier looking. I don’t look so pale. But strike me down if that’s not me. I turn to face Guise at his desk. “You’ve gotta be fucking kidding me with this shit, doc. I see it. I know it happened. But it’s just…not computing.” “We had very much the same reaction at first. For a long time, I fought the notion. It was simply too much for me to process. It took your mother quite a while to get over as well.” I can imagine my mother in hysterics watching me change into this other person. I’m starting to Page 36 | The Paragon Journal