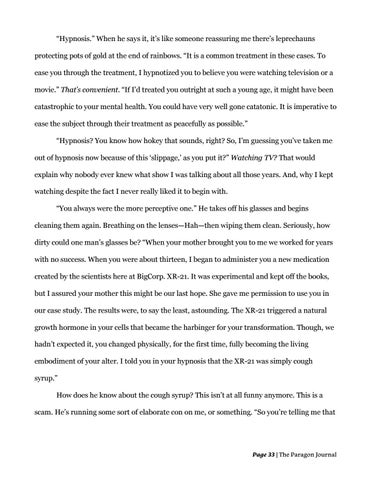 “Hypnosis.” When he says it, it’s like someone reassuring me there’s leprechauns protecting pots of gold at the end of rainbows. “It is a common treatment in these cases. To ease you through the treatment, I hypnotized you to believe you were watching television or a movie.” That’s convenient. “If I’d treated you outright at such a young age, it might have been catastrophic to your mental health. You could have very well gone catatonic. It is imperative to ease the subject through their treatment as peacefully as possible.” “Hypnosis? You know how hokey that sounds, right? So, I’m guessing you’ve taken me out of hypnosis now because of this ‘slippage,’ as you put it?” Watching TV? That would explain why nobody ever knew what show I was talking about all those years. And, why I kept watching despite the fact I never really liked it to begin with. “You always were the more perceptive one.” He takes off his glasses and begins cleaning them again. Breathing on the lenses—Hah—then wiping them clean. Seriously, how dirty could one man’s glasses be? “When your mother brought you to me we worked for years with no success. When you were about thirteen, I began to administer you a new medication created by the scientists here at BigCorp. XR-21. It was experimental and kept off the books, but I assured your mother this might be our last hope. She gave me permission to use you in our case study. The results were, to say the least, astounding. The XR-21 triggered a natural growth hormone in your cells that became the harbinger for your transformation. Though, we hadn’t expected it, you changed physically, for the first time, fully becoming the living embodiment of your alter. I told you in your hypnosis that the XR-21 was simply cough syrup.” How does he know about the cough syrup? This isn’t at all funny anymore. This is a scam. He’s running some sort of elaborate con on me, or something. “So you’re telling me that