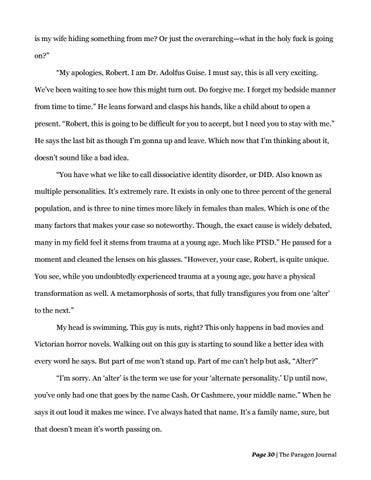 is my wife hiding something from me? Or just the overarching—what in the holy fuck is going on?” “My apologies, Robert. I am Dr. Adolfus Guise. I must say, this is all very exciting. We’ve been waiting to see how this might turn out. Do forgive me. I forget my bedside manner from time to time.” He leans forward and clasps his hands, like a child about to open a present. “Robert, this is going to be difficult for you to accept, but I need you to stay with me.” He says the last bit as though I’m gonna up and leave. Which now that I’m thinking about it, doesn’t sound like a bad idea. “You have what we like to call dissociative identity disorder, or DID. Also known as multiple personalities. It’s extremely rare. It exists in only one to three percent of the general population, and is three to nine times more likely in females than males. Which is one of the many factors that makes your case so noteworthy. Though, the exact cause is widely debated, many in my field feel it stems from trauma at a young age. Much like PTSD.” He paused for a moment and cleaned the lenses on his glasses. “However, your case, Robert, is quite unique. You see, while you undoubtedly experienced trauma at a young age, you have a physical transformation as well. A metamorphosis of sorts, that fully transfigures you from one ‘alter’ to the next.” My head is swimming. This guy is nuts, right? This only happens in bad movies and Victorian horror novels. Walking out on this guy is starting to sound like a better idea with every word he says. But part of me won’t stand up. Part of me can’t help but ask, “Alter?” “I’m sorry. An ‘alter’ is the term we use for your ‘alternate personality.’ Up until now, you’ve only had one that goes by the name Cash. Or Cashmere, your middle name.” When he says it out loud it makes me wince. I’ve always hated that name. It’s a family name, sure, but that doesn’t mean it’s worth passing on. Page 30 | The Paragon Journal