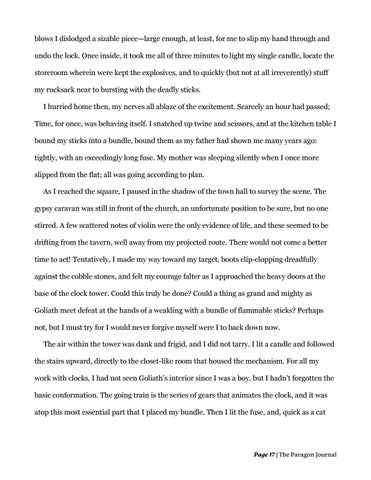 blows I dislodged a sizable piece—large enough, at least, for me to slip my hand through and undo the lock. Once inside, it took me all of three minutes to light my single candle, locate the storeroom wherein were kept the explosives, and to quickly (but not at all irreverently) stuff my rucksack near to bursting with the deadly sticks. I hurried home then, my nerves all ablaze of the excitement. Scarcely an hour had passed; Time, for once, was behaving itself. I snatched up twine and scissors, and at the kitchen table I bound my sticks into a bundle, bound them as my father had shown me many years ago: tightly, with an exceedingly long fuse. My mother was sleeping silently when I once more slipped from the flat; all was going according to plan. As I reached the square, I paused in the shadow of the town hall to survey the scene. The gypsy caravan was still in front of the church, an unfortunate position to be sure, but no one stirred. A few scattered notes of violin were the only evidence of life, and these seemed to be drifting from the tavern, well away from my projected route. There would not come a better time to act! Tentatively, I made my way toward my target, boots clip-clopping dreadfully against the cobble stones, and felt my courage falter as I approached the heavy doors at the base of the clock tower. Could this truly be done? Could a thing as grand and mighty as Goliath meet defeat at the hands of a weakling with a bundle of flammable sticks? Perhaps not, but I must try for I would never forgive myself were I to back down now. The air within the tower was dank and frigid, and I did not tarry. I lit a candle and followed the stairs upward, directly to the closet-like room that housed the mechanism. For all my work with clocks, I had not seen Goliath’s interior since I was a boy, but I hadn’t forgotten the basic conformation. The going train is the series of gears that animates the clock, and it was atop this most essential part that I placed my bundle. Then I lit the fuse, and, quick as a cat