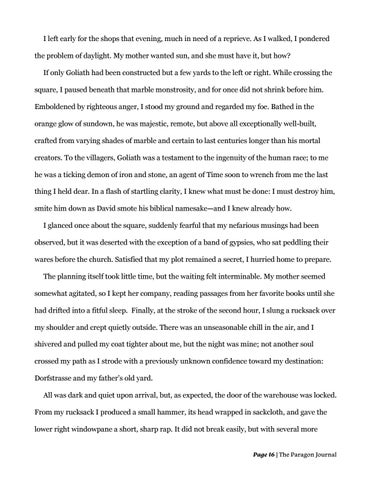 I left early for the shops that evening, much in need of a reprieve. As I walked, I pondered the problem of daylight. My mother wanted sun, and she must have it, but how? If only Goliath had been constructed but a few yards to the left or right. While crossing the square, I paused beneath that marble monstrosity, and for once did not shrink before him. Emboldened by righteous anger, I stood my ground and regarded my foe. Bathed in the orange glow of sundown, he was majestic, remote, but above all exceptionally well-built, crafted from varying shades of marble and certain to last centuries longer than his mortal creators. To the villagers, Goliath was a testament to the ingenuity of the human race; to me he was a ticking demon of iron and stone, an agent of Time soon to wrench from me the last thing I held dear. In a flash of startling clarity, I knew what must be done: I must destroy him, smite him down as David smote his biblical namesakeâ&#x20AC;&#x201D;and I knew already how. I glanced once about the square, suddenly fearful that my nefarious musings had been observed, but it was deserted with the exception of a band of gypsies, who sat peddling their wares before the church. Satisfied that my plot remained a secret, I hurried home to prepare. The planning itself took little time, but the waiting felt interminable. My mother seemed somewhat agitated, so I kept her company, reading passages from her favorite books until she had drifted into a fitful sleep. Finally, at the stroke of the second hour, I slung a rucksack over my shoulder and crept quietly outside. There was an unseasonable chill in the air, and I shivered and pulled my coat tighter about me, but the night was mine; not another soul crossed my path as I strode with a previously unknown confidence toward my destination: Dorfstrasse and my fatherâ&#x20AC;&#x2122;s old yard. All was dark and quiet upon arrival, but, as expected, the door of the warehouse was locked. From my rucksack I produced a small hammer, its head wrapped in sackcloth, and gave the lower right windowpane a short, sharp rap. It did not break easily, but with several more Page 16 | The Paragon Journal