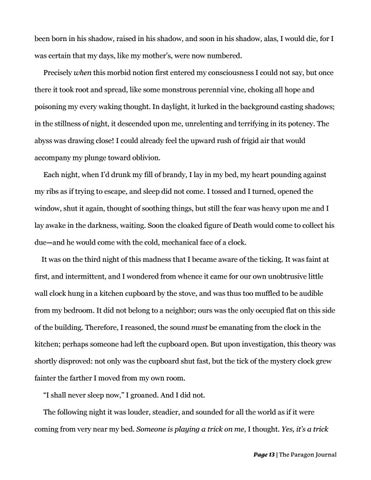 been born in his shadow, raised in his shadow, and soon in his shadow, alas, I would die, for I was certain that my days, like my mother’s, were now numbered. Precisely when this morbid notion first entered my consciousness I could not say, but once there it took root and spread, like some monstrous perennial vine, choking all hope and poisoning my every waking thought. In daylight, it lurked in the background casting shadows; in the stillness of night, it descended upon me, unrelenting and terrifying in its potency. The abyss was drawing close! I could already feel the upward rush of frigid air that would accompany my plunge toward oblivion. Each night, when I’d drunk my fill of brandy, I lay in my bed, my heart pounding against my ribs as if trying to escape, and sleep did not come. I tossed and I turned, opened the window, shut it again, thought of soothing things, but still the fear was heavy upon me and I lay awake in the darkness, waiting. Soon the cloaked figure of Death would come to collect his due—and he would come with the cold, mechanical face of a clock. It was on the third night of this madness that I became aware of the ticking. It was faint at first, and intermittent, and I wondered from whence it came for our own unobtrusive little wall clock hung in a kitchen cupboard by the stove, and was thus too muffled to be audible from my bedroom. It did not belong to a neighbor; ours was the only occupied flat on this side of the building. Therefore, I reasoned, the sound must be emanating from the clock in the kitchen; perhaps someone had left the cupboard open. But upon investigation, this theory was shortly disproved: not only was the cupboard shut fast, but the tick of the mystery clock grew fainter the farther I moved from my own room. “I shall never sleep now,” I groaned. And I did not. The following night it was louder, steadier, and sounded for all the world as if it were coming from very near my bed. Someone is playing a trick on me, I thought. Yes, it’s a trick Page 13 | The Paragon Journal