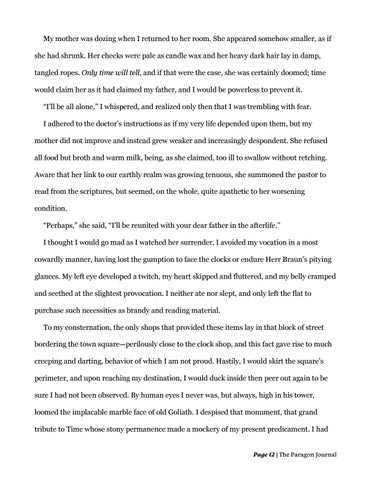 My mother was dozing when I returned to her room. She appeared somehow smaller, as if she had shrunk. Her cheeks were pale as candle wax and her heavy dark hair lay in damp, tangled ropes. Only time will tell, and if that were the case, she was certainly doomed; time would claim her as it had claimed my father, and I would be powerless to prevent it. “I’ll be all alone,” I whispered, and realized only then that I was trembling with fear. I adhered to the doctor’s instructions as if my very life depended upon them, but my mother did not improve and instead grew weaker and increasingly despondent. She refused all food but broth and warm milk, being, as she claimed, too ill to swallow without retching. Aware that her link to our earthly realm was growing tenuous, she summoned the pastor to read from the scriptures, but seemed, on the whole, quite apathetic to her worsening condition. “Perhaps,” she said, “I’ll be reunited with your dear father in the afterlife.” I thought I would go mad as I watched her surrender. I avoided my vocation in a most cowardly manner, having lost the gumption to face the clocks or endure Herr Braun’s pitying glances. My left eye developed a twitch, my heart skipped and fluttered, and my belly cramped and seethed at the slightest provocation. I neither ate nor slept, and only left the flat to purchase such necessities as brandy and reading material. To my consternation, the only shops that provided these items lay in that block of street bordering the town square—perilously close to the clock shop, and this fact gave rise to much creeping and darting, behavior of which I am not proud. Hastily, I would skirt the square’s perimeter, and upon reaching my destination, I would duck inside then peer out again to be sure I had not been observed. By human eyes I never was, but always, high in his tower, loomed the implacable marble face of old Goliath. I despised that monument, that grand tribute to Time whose stony permanence made a mockery of my present predicament. I had Page 12 | The Paragon Journal