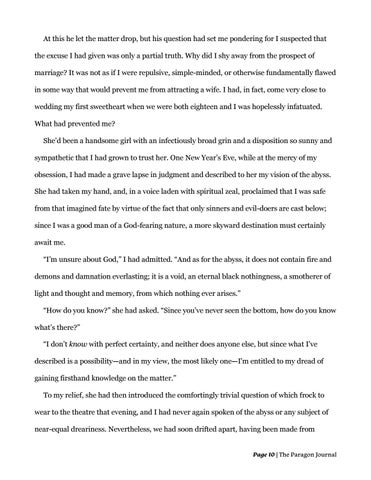 At this he let the matter drop, but his question had set me pondering for I suspected that the excuse I had given was only a partial truth. Why did I shy away from the prospect of marriage? It was not as if I were repulsive, simple-minded, or otherwise fundamentally flawed in some way that would prevent me from attracting a wife. I had, in fact, come very close to wedding my first sweetheart when we were both eighteen and I was hopelessly infatuated. What had prevented me? She’d been a handsome girl with an infectiously broad grin and a disposition so sunny and sympathetic that I had grown to trust her. One New Year’s Eve, while at the mercy of my obsession, I had made a grave lapse in judgment and described to her my vision of the abyss. She had taken my hand, and, in a voice laden with spiritual zeal, proclaimed that I was safe from that imagined fate by virtue of the fact that only sinners and evil-doers are cast below; since I was a good man of a God-fearing nature, a more skyward destination must certainly await me. “I’m unsure about God,” I had admitted. “And as for the abyss, it does not contain fire and demons and damnation everlasting; it is a void, an eternal black nothingness, a smotherer of light and thought and memory, from which nothing ever arises.” “How do you know?” she had asked. “Since you’ve never seen the bottom, how do you know what’s there?” “I don’t know with perfect certainty, and neither does anyone else, but since what I’ve described is a possibility—and in my view, the most likely one—I'm entitled to my dread of gaining firsthand knowledge on the matter.” To my relief, she had then introduced the comfortingly trivial question of which frock to wear to the theatre that evening, and I had never again spoken of the abyss or any subject of near-equal dreariness. Nevertheless, we had soon drifted apart, having been made from Page 10 | The Paragon Journal