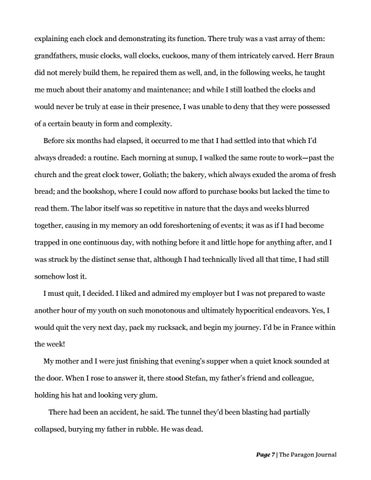 explaining each clock and demonstrating its function. There truly was a vast array of them: grandfathers, music clocks, wall clocks, cuckoos, many of them intricately carved. Herr Braun did not merely build them, he repaired them as well, and, in the following weeks, he taught me much about their anatomy and maintenance; and while I still loathed the clocks and would never be truly at ease in their presence, I was unable to deny that they were possessed of a certain beauty in form and complexity. Before six months had elapsed, it occurred to me that I had settled into that which I’d always dreaded: a routine. Each morning at sunup, I walked the same route to work—past the church and the great clock tower, Goliath; the bakery, which always exuded the aroma of fresh bread; and the bookshop, where I could now afford to purchase books but lacked the time to read them. The labor itself was so repetitive in nature that the days and weeks blurred together, causing in my memory an odd foreshortening of events; it was as if I had become trapped in one continuous day, with nothing before it and little hope for anything after, and I was struck by the distinct sense that, although I had technically lived all that time, I had still somehow lost it. I must quit, I decided. I liked and admired my employer but I was not prepared to waste another hour of my youth on such monotonous and ultimately hypocritical endeavors. Yes, I would quit the very next day, pack my rucksack, and begin my journey. I’d be in France within the week! My mother and I were just finishing that evening’s supper when a quiet knock sounded at the door. When I rose to answer it, there stood Stefan, my father’s friend and colleague, holding his hat and looking very glum. There had been an accident, he said. The tunnel they’d been blasting had partially collapsed, burying my father in rubble. He was dead. Page 7 | The Paragon Journal