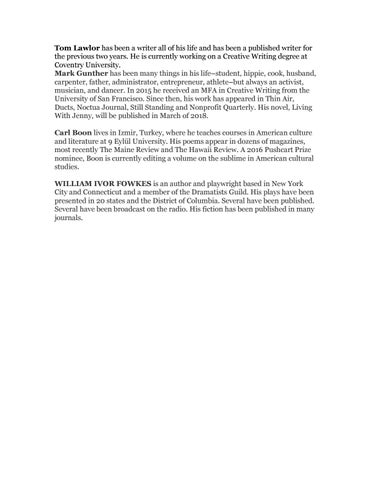 Tom Lawlor has been a writer all of his life and has been a published writer for the previous two years. He is currently working on a Creative Writing degree at Coventry University. Mark Gunther has been many things in his life–student, hippie, cook, husband, carpenter, father, administrator, entrepreneur, athlete–but always an activist, musician, and dancer. In 2015 he received an MFA in Creative Writing from the University of San Francisco. Since then, his work has appeared in Thin Air, Ducts, Noctua Journal, Still Standing and Nonprofit Quarterly. His novel, Living With Jenny, will be published in March of 2018. Carl Boon lives in Izmir, Turkey, where he teaches courses in American culture and literature at 9 Eylül University. His poems appear in dozens of magazines, most recently The Maine Review and The Hawaii Review. A 2016 Pushcart Prize nominee, Boon is currently editing a volume on the sublime in American cultural studies. WILLIAM IVOR FOWKES is an author and playwright based in New York City and Connecticut and a member of the Dramatists Guild. His plays have been presented in 20 states and the District of Columbia. Several have been published. Several have been broadcast on the radio. His fiction has been published in many journals.