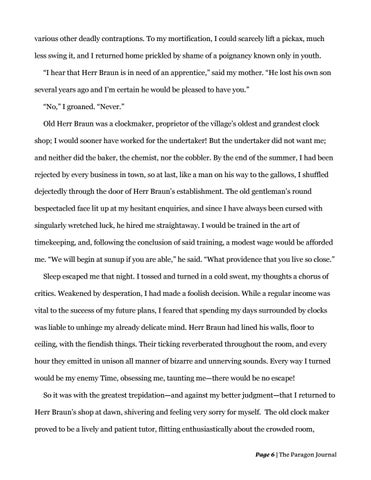 various other deadly contraptions. To my mortification, I could scarcely lift a pickax, much less swing it, and I returned home prickled by shame of a poignancy known only in youth. “I hear that Herr Braun is in need of an apprentice,” said my mother. “He lost his own son several years ago and I’m certain he would be pleased to have you.” “No,” I groaned. “Never.” Old Herr Braun was a clockmaker, proprietor of the village’s oldest and grandest clock shop; I would sooner have worked for the undertaker! But the undertaker did not want me; and neither did the baker, the chemist, nor the cobbler. By the end of the summer, I had been rejected by every business in town, so at last, like a man on his way to the gallows, I shuffled dejectedly through the door of Herr Braun’s establishment. The old gentleman’s round bespectacled face lit up at my hesitant enquiries, and since I have always been cursed with singularly wretched luck, he hired me straightaway. I would be trained in the art of timekeeping, and, following the conclusion of said training, a modest wage would be afforded me. “We will begin at sunup if you are able,” he said. “What providence that you live so close.” Sleep escaped me that night. I tossed and turned in a cold sweat, my thoughts a chorus of critics. Weakened by desperation, I had made a foolish decision. While a regular income was vital to the success of my future plans, I feared that spending my days surrounded by clocks was liable to unhinge my already delicate mind. Herr Braun had lined his walls, floor to ceiling, with the fiendish things. Their ticking reverberated throughout the room, and every hour they emitted in unison all manner of bizarre and unnerving sounds. Every way I turned would be my enemy Time, obsessing me, taunting me—there would be no escape! So it was with the greatest trepidation—and against my better judgment—that I returned to Herr Braun’s shop at dawn, shivering and feeling very sorry for myself. The old clock maker proved to be a lively and patient tutor, flitting enthusiastically about the crowded room, Page 6 | The Paragon Journal