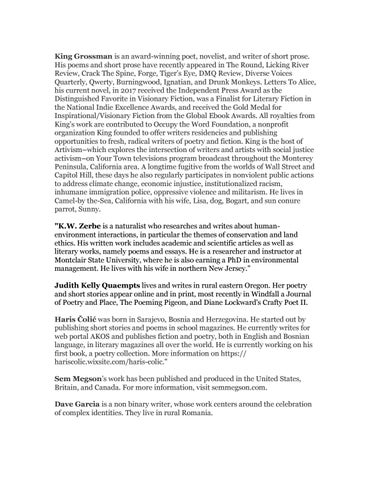 King Grossman is an award-winning poet, novelist, and writer of short prose. His poems and short prose have recently appeared in The Round, Licking River Review, Crack The Spine, Forge, Tiger’s Eye, DMQ Review, Diverse Voices Quarterly, Qwerty, Burningwood, Ignatian, and Drunk Monkeys. Letters To Alice, his current novel, in 2017 received the Independent Press Award as the Distinguished Favorite in Visionary Fiction, was a Finalist for Literary Fiction in the National Indie Excellence Awards, and received the Gold Medal for Inspirational/Visionary Fiction from the Global Ebook Awards. All royalties from King’s work are contributed to Occupy the Word Foundation, a nonprofit organization King founded to offer writers residencies and publishing opportunities to fresh, radical writers of poetry and fiction. King is the host of Artivism–which explores the intersection of writers and artists with social justice activism–on Your Town televisions program broadcast throughout the Monterey Peninsula, California area. A longtime fugitive from the worlds of Wall Street and Capitol Hill, these days he also regularly participates in nonviolent public actions to address climate change, economic injustice, institutionalized racism, inhumane immigration police, oppressive violence and militarism. He lives in Camel-by the-Sea, California with his wife, Lisa, dog, Bogart, and sun conure parrot, Sunny. "K.W. Zerbe is a naturalist who researches and writes about humanenvironment interactions, in particular the themes of conservation and land ethics. His written work includes academic and scientific articles as well as literary works, namely poems and essays. He is a researcher and instructor at Montclair State University, where he is also earning a PhD in environmental management. He lives with his wife in northern New Jersey."  Judith Kelly Quaempts lives and writes in rural eastern Oregon. Her poetry and short stories appear online and in print, most recently in Windfall a Journal of Poetry and Place, The Poeming Pigeon, and Diane Lockward's Crafty Poet II.   Haris Čolić was born in Sarajevo, Bosnia and Herzegovina. He started out by publishing short stories and poems in school magazines. He currently writes for web portal AKOS and publishes fiction and poetry, both in English and Bosnian language, in literary magazines all over the world. He is currently working on his first book, a poetry collection. More information on https:// hariscolic.wixsite.com/haris-colic." Sem Megson’s work has been published and produced in the United States, Britain, and Canada. For more information, visit semmegson.com. Dave Garcia is a non binary writer, whose work centers around the celebration of complex identities. They live in rural Romania.