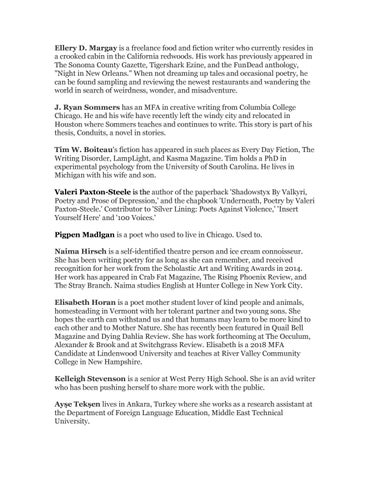 Ellery D. Margay is a freelance food and fiction writer who currently resides in a crooked cabin in the California redwoods. His work has previously appeared in The Sonoma County Gazette, Tigershark Ezine, and the FunDead anthology, "Night in New Orleans." When not dreaming up tales and occasional poetry, he can be found sampling and reviewing the newest restaurants and wandering the world in search of weirdness, wonder, and misadventure. J. Ryan Sommers has an MFA in creative writing from Columbia College Chicago. He and his wife have recently left the windy city and relocated in Houston where Sommers teaches and continues to write. This story is part of his thesis, Conduits, a novel in stories. Tim W. Boiteau's fiction has appeared in such places as Every Day Fiction, The Writing Disorder, LampLight, and Kasma Magazine. Tim holds a PhD in experimental psychology from the University of South Carolina. He lives in Michigan with his wife and son. Valeri Paxton-Steele is the author of the paperback 'Shadowstyx By Valkyri, Poetry and Prose of Depression,' and the chapbook 'Underneath, Poetry by Valeri Paxton-Steele.' Contributor to 'Silver Lining: Poets Against Violence,' 'Insert Yourself Here' and '100 Voices.' Pigpen Madlgan is a poet who used to live in Chicago. Used to. Naima Hirsch is a self-identified theatre person and ice cream connoisseur. She has been writing poetry for as long as she can remember, and received recognition for her work from the Scholastic Art and Writing Awards in 2014. Her work has appeared in Crab Fat Magazine, The Rising Phoenix Review, and The Stray Branch. Naima studies English at Hunter College in New York City. Elisabeth Horan is a poet mother student lover of kind people and animals, homesteading in Vermont with her tolerant partner and two young sons. She hopes the earth can withstand us and that humans may learn to be more kind to each other and to Mother Nature. She has recently been featured in Quail Bell Magazine and Dying Dahlia Review. She has work forthcoming at The Occulum, Alexander & Brook and at Switchgrass Review. Elisabeth is a 2018 MFA Candidate at Lindenwood University and teaches at River Valley Community College in New Hampshire. Kelleigh Stevenson is a senior at West Perry High School. She is an avid writer who has been pushing herself to share more work with the public. AyĹ&#x;e TekĹ&#x;en lives in Ankara, Turkey where she works as a research assistant at the Department of Foreign Language Education, Middle East Technical University.