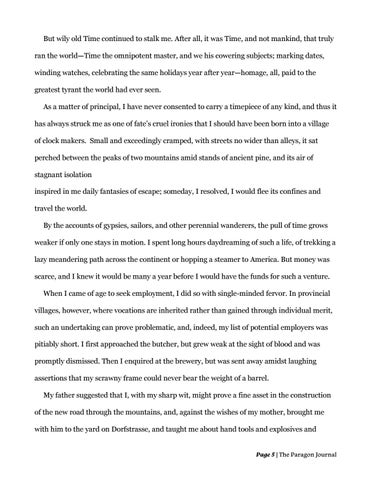 But wily old Time continued to stalk me. After all, it was Time, and not mankind, that truly ran the worldâ&#x20AC;&#x201D;Time the omnipotent master, and we his cowering subjects; marking dates, winding watches, celebrating the same holidays year after yearâ&#x20AC;&#x201D;homage, all, paid to the greatest tyrant the world had ever seen. As a matter of principal, I have never consented to carry a timepiece of any kind, and thus it has always struck me as one of fateâ&#x20AC;&#x2122;s cruel ironies that I should have been born into a village of clock makers. Small and exceedingly cramped, with streets no wider than alleys, it sat perched between the peaks of two mountains amid stands of ancient pine, and its air of stagnant isolation inspired in me daily fantasies of escape; someday, I resolved, I would flee its confines and travel the world. By the accounts of gypsies, sailors, and other perennial wanderers, the pull of time grows weaker if only one stays in motion. I spent long hours daydreaming of such a life, of trekking a lazy meandering path across the continent or hopping a steamer to America. But money was scarce, and I knew it would be many a year before I would have the funds for such a venture. When I came of age to seek employment, I did so with single-minded fervor. In provincial villages, however, where vocations are inherited rather than gained through individual merit, such an undertaking can prove problematic, and, indeed, my list of potential employers was pitiably short. I first approached the butcher, but grew weak at the sight of blood and was promptly dismissed. Then I enquired at the brewery, but was sent away amidst laughing assertions that my scrawny frame could never bear the weight of a barrel. My father suggested that I, with my sharp wit, might prove a fine asset in the construction of the new road through the mountains, and, against the wishes of my mother, brought me with him to the yard on Dorfstrasse, and taught me about hand tools and explosives and Page 5 | The Paragon Journal