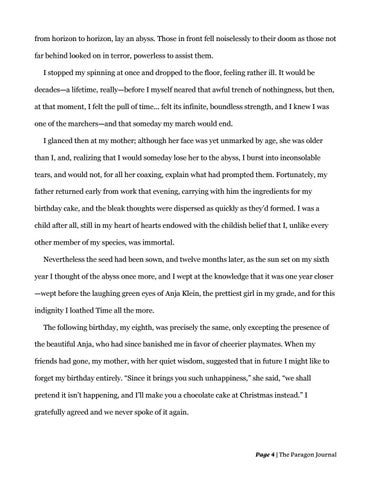 from horizon to horizon, lay an abyss. Those in front fell noiselessly to their doom as those not far behind looked on in terror, powerless to assist them. I stopped my spinning at once and dropped to the floor, feeling rather ill. It would be decades—a lifetime, really—before I myself neared that awful trench of nothingness, but then, at that moment, I felt the pull of time... felt its infinite, boundless strength, and I knew I was one of the marchers—and that someday my march would end. I glanced then at my mother; although her face was yet unmarked by age, she was older than I, and, realizing that I would someday lose her to the abyss, I burst into inconsolable tears, and would not, for all her coaxing, explain what had prompted them. Fortunately, my father returned early from work that evening, carrying with him the ingredients for my birthday cake, and the bleak thoughts were dispersed as quickly as they’d formed. I was a child after all, still in my heart of hearts endowed with the childish belief that I, unlike every other member of my species, was immortal. Nevertheless the seed had been sown, and twelve months later, as the sun set on my sixth year I thought of the abyss once more, and I wept at the knowledge that it was one year closer —wept before the laughing green eyes of Anja Klein, the prettiest girl in my grade, and for this indignity I loathed Time all the more. The following birthday, my eighth, was precisely the same, only excepting the presence of the beautiful Anja, who had since banished me in favor of cheerier playmates. When my friends had gone, my mother, with her quiet wisdom, suggested that in future I might like to forget my birthday entirely. “Since it brings you such unhappiness,” she said, “we shall pretend it isn’t happening, and I’ll make you a chocolate cake at Christmas instead.” I gratefully agreed and we never spoke of it again.