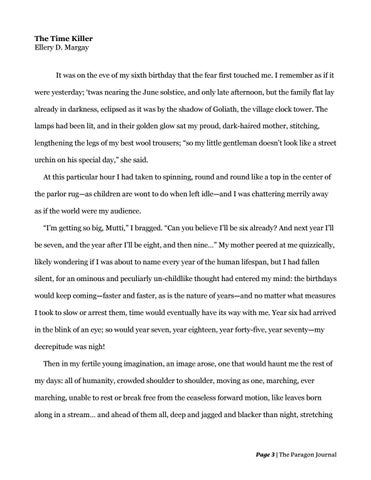 It was on the eve of my sixth birthday that the fear first touched me. I remember as if it were yesterday; ‘twas nearing the June solstice, and only late afternoon, but the family flat lay already in darkness, eclipsed as it was by the shadow of Goliath, the village clock tower. The lamps had been lit, and in their golden glow sat my proud, dark-haired mother, stitching, lengthening the legs of my best wool trousers; “so my little gentleman doesn’t look like a street urchin on his special day,” she said. At this particular hour I had taken to spinning, round and round like a top in the center of the parlor rug—as children are wont to do when left idle—and I was chattering merrily away as if the world were my audience. “I’m getting so big, Mutti,” I bragged. “Can you believe I’ll be six already? And next year I’ll be seven, and the year after I’ll be eight, and then nine…” My mother peered at me quizzically, likely wondering if I was about to name every year of the human lifespan, but I had fallen silent, for an ominous and peculiarly un-childlike thought had entered my mind: the birthdays would keep coming—faster and faster, as is the nature of years—and no matter what measures I took to slow or arrest them, time would eventually have its way with me. Year six had arrived in the blink of an eye; so would year seven, year eighteen, year forty-five, year seventy—my decrepitude was nigh! Then in my fertile young imagination, an image arose, one that would haunt me the rest of my days: all of humanity, crowded shoulder to shoulder, moving as one, marching, ever marching, unable to rest or break free from the ceaseless forward motion, like leaves born along in a stream… and ahead of them all, deep and jagged and blacker than night, stretching