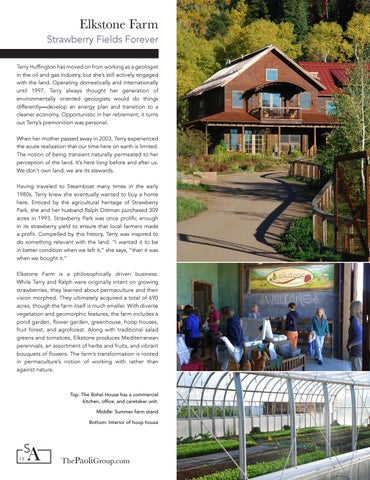 Elkstone Farm Strawberry Fields Forever Terry Huffington has moved on from working as a geologist in the oil and gas industry, but she’s still actively engaged with the land. Operating domestically and internationally until 1997, Terry always thought her generation of environmentally oriented geologists would do things differently—develop an energy plan and transition to a cleaner economy. Opportunistic in her retirement, it turns out Terry’s premonition was personal. When her mother passed away in 2003, Terry experienced the acute realization that our time here on earth is limited. The notion of being transient naturally permeated to her perception of the land. It’s here long before and after us. We don’t own land; we are its stewards. Having traveled to Steamboat many times in the early 1980s, Terry knew she eventually wanted to buy a home here. Enticed by the agricultural heritage of Strawberry Park, she and her husband Ralph Dittman purchased 309 acres in 1993. Strawberry Park was once prolific enough in its strawberry yield to ensure that local farmers made a profit. Compelled by this history, Terry was inspired to do something relevant with the land. “I wanted it to be in better condition when we left it,” she says, “than it was when we bought it.” Elkstone Farm is a philosophically driven business. While Terry and Ralph were originally intent on growing strawberries, they learned about permaculture and their vision morphed. They ultimately acquired a total of 690 acres, though the farm itself is much smaller. With diverse vegetation and geomorphic features, the farm includes a pond garden, flower garden, greenhouse, hoop houses, fruit forest, and agroforest. Along with traditional salad greens and tomatoes, Elkstone produces Mediterranean perennials, an assortment of herbs and fruits, and vibrant bouquets of flowers. The farm’s transformation is rooted in permaculture’s notion of working with rather than against nature.