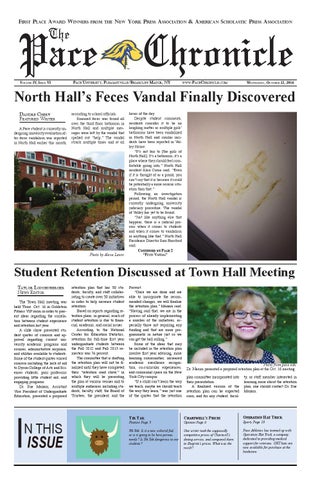 according to school ofﬁcials. Smeared feces was found all over the third ﬂoor bathroom in North Hall and multiple messages were left by the vandal that spelled out “help.” The vandal struck multiple times and at all

hours of the day. Despite student comments, residents consider it to be no laughing matter as multiple girls’ bathrooms have been vandalized in North Hall and similar incidents have been reported in Valley House. “It’s not fair to [the girls of North Hall]. It’s a bathroom; it’s a place where they should feel comfortable going into,” North Hall resident Alex Coma said. “Even if it is thought of as a prank, you can’t say that it is because it could be potentially a more serious situation than that.” Following an investigation period, the North Hall vandal is currently undergoing university judiciary procedure. The vandal of Valley has yet to be found. “Just like anything else that happens, there is a judicial process when it comes to students and when it comes to vandalism or anything like that,” North Hall Residence Director Sam Bassford said. CONTINUED ON PAGE 2 “FECES VANDAL”

retention plan that has 50 students, faculty, and staff collaborating to create over 50 initiatives in order to help increase student retention. Based on reports regarding retention plans, in general, much of student retention is due to ﬁnancial, academic, and social issues. According to the National Center for Education Statistics, retention for full-time ﬁrst year undergraduate students between the Fall 2012 and Fall 2013 semesters was 76 percent. The committee that is drafting the retention plan will not be ﬁnalized until they have completed their “retention road show,” in which they will be presenting the plan at various venues and to multiple audiences including students, faculty, staff, the Board of Trustees, the president, and the

Provost. “Once we are done and are able to incorporate the recommended changes, we will ﬁnalize the retention plan,” Maxam said. “Having said that, we are in the process of already implementing a number of the initiatives, especially those not requiring any funding and that are more programmatic in nature just so we can get the ball rolling.” Some of the ideas that may be included in the retention plan involve ﬁrst year advising, more learning communities, increased academic excellence recognition, co-curricular experiences, and communal space on the New York City campus. “If a child can’t learn the way we teach, maybe we should teach the way they learn,” was just one of the quotes that the retention

Photo from pace.edu Dr. Maxim presented a proposed retention plan at the Oct. 16 meeting. plan committee incorporated into their presentation. A ﬁnalized version of the retention plan can be expected soon, and for any student, facul-

ty, or staff member interested in learning more about the retention plan, one should contact Dr. Sue Maxam.

Yik Yak: Is it a new cultural fad, or is it going to be here permanently? Is Yik Yak dangerous to our students?

One writer took the supposedly competitive prices of Chartwell’s dining service, and compared them to Shoprite’s prices. What was the result?

Pace Athletics has teamed up with Operation Hat Trick, a company dedicated to providing medical support for veterans. OHT hats are now available for purchase at the bookstore. 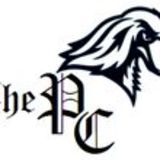