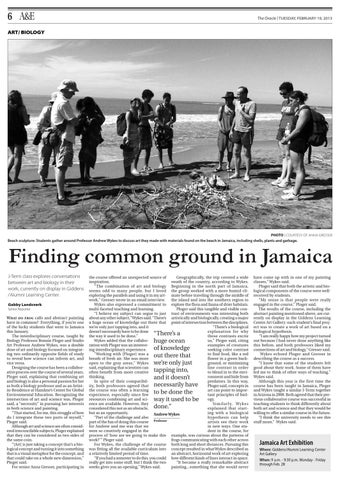 PHOTO | COURTESY OF ANNA GRESSER Beach sculpture: Students gather around Professor Andrew Wykes to discuss art they made with materials found on the beach in Jamaica, including shells, plants and garbage.

Finding common ground in Jamaica J-Term class explores conversations between art and biology in their work, currently on display in Giddens /Alumni Learning Center. Gabby Landsverk Senior Reporter What do frog calls and abstract painting have in common? Everything, if you’re one of the lucky students that went to Jamaica this January. The interdisciplinary course, taught by Biology Professor Bonnie Ploger and Studio Art Professor Andrew Wykes, was a double dose of art and biology focused on integrating two ordinarily opposite fields of study to reveal how science can inform art, and vice versa. Designing the course has been a collaborative process over the course of several years, Ploger said, explaining that combining art and biology is also a personal passion for her as both a biology professor and as an Artistin-Residence at Hamline’s Center for Global Environmental Education. Recognizing the intersection of art and science was, Ploger said, a “necessity” in pursuing her interests in both science and painting. “That started, for me, this struggle of how do I integrate these two parts of myself,” Ploger said. Although art and science are often considered irreconcilable subjects, Ploger explained that they can be considered as two sides of the same coin. “[Art] is just taking a concept that’s a biological concept and turning it into something that is a visual metaphor for the concept, and that could take on a whole new dimension,” Ploger said. For senior Anna Gresser, participating in

the course offered an unexpected source of Geographically, the trip covered a wide inspiration. swath of the country, according to Wykes. “The combination of art and biology Beginning in the north part of Jamaica, seems odd to many people, but I loved the group worked with a more humid cliexploring the parallels and using it in my art- mate before traveling through the middle of work,” Gresser wrote in an email interview. the island and into the southern region to Wykes also expressed a commitment to explore the flora and fauna of drier habitats. multi-faceted teaching and learning. Ploger said this tangible and visible con“I believe my subject can segue to just trast of environments was interesting both about any other subject,” Wykes said. “There’s artistically and biologically, creating a major a huge ocean of knowledge out there that point of intersection between the disciplines. we’re only just tapping into, and it “There’s a biological doesn’t necessarily have to be done explanation for why “There’s a the way it used to be done.” those contrasts excite Wykes added that the collabo- huge ocean us,” Ploger said, citing ration with Ploger was an interestexamples of creatures of knowledge ing interdisciplinary experience. seeking color contrast “Working with [Ploger] was a out there that to find food, like a red breath of fresh air. She was more flower in a green backopen to the gray areas,” Wykes we’re only just ground, or minimizing said, explaining that scientists can line contrast in order often benefit from more creative tapping into, to blend in to the envithinking. ronment and hide from and it doesn’t In spite of their compatibilpredators. In this way, ity, both professors agreed that necessarily have Ploger said, concepts in the course was often a learning art can point to importo be done the experience, especially since few tant principles of biolresources combining art and sci- way it used to be ogy. ence are available. However, they Si m i l a r l y, Wy k e s considered this not as an obstacle, done.” explained that startbut as an opportunity. ing with a biological Andrew Wykes “Part of the challenge and also hypothesis can help part of the fun of doing this course Professor artists see their work for Andrew and me was that we in new ways. One stuwere so creatively engaged in the dent in the course, for process of ‘how are we going to make this example, was curious about the patterns of work?’” Ploger said. frogs communicating with each other across For Wykes, the challenge of the course both long and short distances. Pursuing this was fitting all the available curriculum into concept resulted in what Wykes described as a relatively limited period of time. an abstract, horizontal work of art exploring “If you had a semester to do this, you could how different kinds of lines interact in space. really get into some stuff, but I think the two “It became a really remarkable abstract weeks gives you an opening,” Wykes said. painting...something that she would never

have come up with in one of my painting classes,” Wykes said. Ploger said that both the artistic and biological components of the course were wellreceived by students. “My sense is that people were really engaged in the course,” Ploger said. The results of the course, including the abstract painting mentioned above, are currently on display in the Giddens Learning Center Art Gallery: each student’s final project was to create a work of art based on a biological hypothesis. “I am really happy how my project turned out because I had never done anything like this before, and both professors liked my connections of art and biology,” Gresser said. Wykes echoed Ploger and Gresser in describing the course as a success. “I know that some of the students felt good about their work. Some of them have led me to think of other ways of teaching,” Wykes said. Although this year is the first time the course has been taught in Jamaica, Ploger and Wykes taught a similar J-Term together in Arizona in 2008. Both agreed that their previous collaborative course was successful in teaching students to think differently about both art and science and that they would be willing to offer a similar course in the future. “I think the university needs to see this stuff more,” Wykes said. 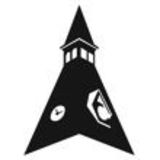