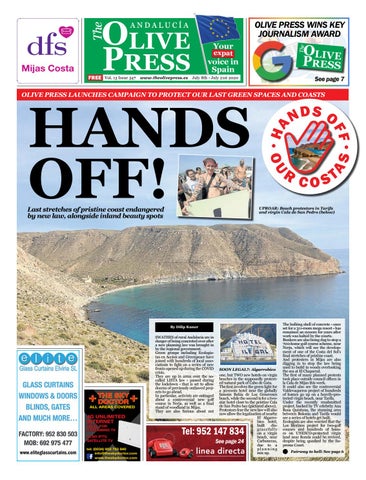 SKY + THE DOCTOR + ALL AREAS COVERED

SOON LEGAL?: Algarrobico one, but TWO new hotels on virgin beaches in the supposedly protected natural park of Cabo de Gata. The first involves the green light for a 30-room hotel near the globally famous Bahia de Los Genoveses beach, while the second is for a twostar hotel close to the pristine Cala de San Pedro bay (pictured above). Protestors fear the new law will also now allow the legalization of nearby El Algarrobico hotel, built disgracefully on a virgin beach, near Carboneras, See page 24 due to a planning mix up.

SWATHES of rural Andalucia are in danger of being concreted over after a new planning law was brought in by the regional government. Green groups including Ecologistas en Accion and Greenpeace have joined with hundreds of local associations to fight on a series of new fronts opened up during the COVID crisis. They are up in arms over the socalled LISTA law - passed during the lockdown - that is set to allow dozens of previously outlawed projects to go ahead. In particular, activists are outraged about a controversial new golf course in Nerja, as well as a final stand of woodland in Mijas. They are also furious about not

The hulking shell of concrete - once set for a 311-room mega resort - has remained an eyesore for years after work was halted by the courts. Bunkers are also being dug to stop a 700-home golf course scheme, near Nerja, which will see the development of one of the Costa del Solâ&#x20AC;&#x2122;s final stretches of pristine coast. And protesters in Mijas are also digging in to stop the law being used to build in woods overlooking the sea at El Chaparral. The first of many planned protests took place outside council offices in la Cala de Mijas this week. It could also see the controversial Valdevaqueros project of hundreds of homes go up on a heavily-protected virgin beach, near Tarifa. Under the recently resubmitted project, backed by TV celebrity Ana Rosa Quintana, the stunning area between Bolonia and Tarifa would see a series of hotels get built. Ecologists are also worried that the Los Merinos project for two-golf courses and hundreds of houses on UNESCO-protected virgin land near Ronda could be revived, despite being quashed by the Supreme Court. Fairway to hell: See page 6

The original and only investigative English Language newspaper in Andalucia

The original and only investigative English Language newspaper in Andalucia