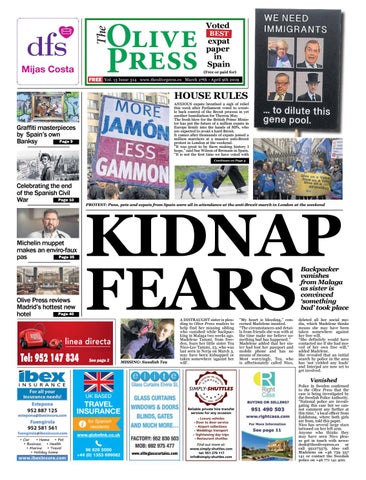 (Free or paid for)

ANXIOUS expats breathed a sigh of relief this week after Parliament voted to wrestle back control of the Brexit process in yet another humiliation for Theresa May. The fresh blow for the British Prime Minister has put the future of a million expats in Europe firmly into the hands of MPs, who are expected to avoid a hard Brexit. It comes after thousands of expats joined a million marchers at a massive anti-Brexit protest in London at the weekend. “It was great to be there making history I hope,” said Sue Wilson of Bremain in Spain. “It is not the first time we have voted with

Celebrating the end of the Spanish Civil Page 10 War

Kidnap fears PROTEST: Puns, pets and expats from Spain were all in attendance at the anti-Brexit march in London at the weekend

A DISTRAUGHT sister is pleading to Olive Press readers to help find her missing sibling who vanished while backpacking in Malaga two weeks ago. Madelene Tammi, from Sweden, fears her little sister Tea Nico-Lee Tammi, 23, who was last seen in Nerja on March 3, may have been kidnapped or taken somewhere ‘against her will’.

“My heart is bleeding,” concerned Madelene insisted. “The circumstances and details from friends she was with at the time make me believe something bad has happened.” Madelene added that her sister had lost her passport and mobile phone and has no means of income. Most worryingly, Tea, who is affectionately called Nico,

deleted all her social media, which Madelene thinks means she may have been taken somewhere against her free will. “She definitely would have contacted me if she had moved of her own free will,” added Madelene. She revealed that an initial search by police in the area has ‘not yielded any leads’ and Interpol are now set to get involved.

Police in Sweden confirmed to the Olive Press that the case is being investigated by the Swedish Police Authority. “National police are investigating this case but we cannot comment any further at this time,” a local officer from Eskilstuna, where both girls are from, told this paper. Nico has several large stars tattooed on her left arm. Anyone who thinks they may have seen Nico please get in touch with newsdesk@theolivepress.es or call 951273575. Also call Madelene on +46 739 257 141 or contact the Swedish police on +46 771 141 400.

The original and only investigative English newspaper in Andalucia and Spain 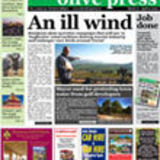