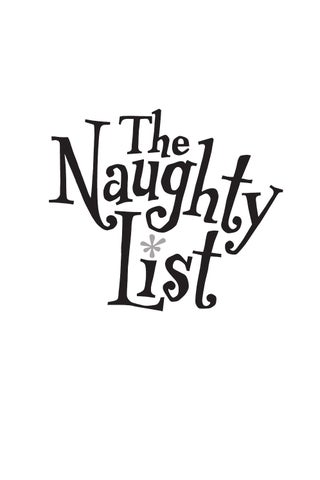 r followed To Dad, who neve reat to make through on his th I spilled me walk home if r.—MF ca e ice cream in th

Foreword Magic stinks. It’s true. If you’re lying awake at night hoping something magical happens to you, you’re going to be in for a rude surprise. There are no unicorns or rainbows or that sparkly tinkling sound when that perky, annoying fairy taps her wand. Nope. Everything sounds like a chorus of Auto-Tuned farm animals. And not the cute ones. How does it feel? Like you’ve eaten six bags of macaroni-and-cheese dust washed down with a quart of maple syrup while jumping rope for twelve hours. And it really does stink. You know that gross cheese your grandmother serves with the crackers that expired in 1987? It’s like that. TIMES INFINITY! Maybe it’s just me. Maybe it’s different for other kids. Or maybe stinky magic is what you get when you try as hard as you can to ruin Christmas. Like I did. vi

My name is Bobbie Mendoza and my favorite color is black. Black goes with everything. Even me. These days it’s about the only thing that does. The stupid antique dolls over my bed don’t. The stupid dress Mom made me wear for picture day doesn’t. And the stupid HOT PINK cast I’ve had on my broken wrist for the last two weeks totally doesn’t! I wanted a black cast. 1

I never get what I want. I want to skip being twelve and go straight to twenty-two. I want to eat pizza for breakfast, floss just once a week, and stay up past nine thirty. But most of all I want our house NOT to be the 24/7-InflatableDead-Eyed-Zombie-Santa-on-the-Roof House.

I wasn’t always like this. I wasn’t always so angry about everything. I was a normal kid. Not a girly girl exactly, but a regular girl who liked regular stuff. Stuff like waffle-pops (they’re better frozen), painting my little brother’s toes black while he’s asleep, and winning the tristate-area spelling bee. And I LOVED Christmas. My favorite part was when Dad and I dressed up our dog, Maggie, like an elf. It was our thing. Every year we’d get more elaborate. Last year was the best. But not anymore. Someone left for the North Dakota oil boom and never bothered to take down all the Christmas decorations and someone else is too busy going back to work and someone else is obsessed with Christmas and wants Zombie Santa to stay up forever and someone else won’t go on the roof because there’s no protection from alien mind-reading rays that turn your brain to cheese. 3

It’s embarrassing! And no one cares! Not my absent dad. Or my always-working mom. Or my freakishly weird Santa-suit-wearing six-year-old brother. Or my we-don’t-say-“crazy”-we-say-“different” uncle. You can die of embarrassment, you know. It’s a thing. I read about it online.

Only I didn’t die. I just sat in my room and tried to ignore Zombie Santa. Which was hard once most of the air leaked out and he started flapping against my window like the world’s saddest flag.

Every. Single. NIGHT! I didn’t lose it right away. First, I did what I always do when I’m freaking out—I motorboat lip hummed “America the Beautiful” to myself. Sure, it’s stupid, but somehow it always calms me down. Not this time. I tried to be brave. I knew things were tough with Dad away and Mom working. That’s why every time Mom would ask if I was okay, I’d lie and say, “Fine.” Because deep down I knew that Dad needed this job and Mom needed to work and Tad was just going through a phase . . . AND it was totally just a stupid blow-up Santa. Even if it really, really bugged me that no one could see it. REALLY, REALLY BUGGED ME. 5

For a while I yelled. And screamed. And did handstands while yelling and screaming.

Zombie Santa attacked! Actually he didn’t really attack. A strong gust of wind blew him through the window. But at three in the morning, in the middle of a riding-a-dragon-whileeating-spaghetti dream, you’re not exactly thinking straight. I snapped. I’d had enough. North Pole Fats was going down. Only he didn’t go down alone.

We both did. Christmas threw me off a roof! Christmas BULLIED ME! Later, after the pink cast and a lot more lying about how fine I was, I remembered the anti-bullying assembly at school and the fourth thing you do when youâ&#x20AC;&#x2122;re being bullied:

I would not sing any Christmas carols. I would not drink any hot chocolate. I would not partake in any good tidings. And I most certainly would not buy or accept any presents. No exceptions.

“You’re doing what?” asked Mom from across the dinner table. “She’s ignoring Christmas,” said Tad, wearing one of his seven Santa suits. “She thinks it’s bullying her.” I could explain (while doing a handstand), but it wouldn’t make any difference. They don’t understand. No one does. “That doesn’t even make sense,” said Mom. “It makes perfect sense to me,” said Uncle Dale. This should be good.

Not bad. Uncle Dale continued, “She’s ignoring that which causes her pain. Like I’m ignoring this meat loaf.” Mom eyed Uncle Dale. “What’s wrong with the meat loaf?” Uncle Dale didn’t say anything. He didn’t have to. We all knew what was wrong: Dad didn’t make it. Dad’s meat loaf is epic. He makes it from scratch with caramelized onions and his supersecret special BBQ sauce instead of ketchup. It’s so awesome, we don’t call it meat loaf. We call it meat cake. Once when we were low on cash, Dad served it on my birthday. No one minded.

Especially not me. Mom glared at Uncle Dale. She didn’t say anything. She knew better than to argue with a man wearing a spaghetti strainer on his head. Uncle Dale is my dad’s younger brother. He used to be a lawyer. And a sock-puppet ventriloquist. And a rodeo clown. And a plumber. He’s always had a tough time sticking to one job. According to Dad, something strange happened to him when he was young. But no one talks about it. Uncle Dale moved in last year around the time Dad left. He lives in our basement and runs a website called theyreeverywhere.com. He posts stuff about mind-reading aliens that turn your brain to cheese and Big Foot and even Santa.

Uncle Dale even claims the elves text him. Apparently, one named Phil is superchatty. Mom gave up on Uncle Dale and turned to me. “Bobbie, Christmas is going to happen in two days whether you ignore it or not.” “It’s not going to happen to me.” “You don’t want any presents?” asked Tad. I shook my head. “Well, Santa’s bringing me a 3D Mega Machine!” said Tad.

Mom said, “No, honey, that’s not what—” Uncle Dale nodded. “That’s exactly what it—” “HOLD IT!” I yelled. Everyone stopped talking and stared at me. “My ignoring Christmas has nothing to do with whether Santa is going to bring Tad his 3D Whateverit’scalled,” I said. “But Uncle Dale said!” cried Tad. “Uncle Dale wears a spaghetti strainer on his head!” “Bobbie!” cried Mom. “Well, he does!” I said. Uncle Dale frowned. “It’s a modified spaghetti strainer. It keeps them from reading my mind.” “Sure. Whatever,” I said. “Listen. Who cares if I ignore Christmas? What I do or don’t do has no bearing on ANYTHING!” Mom looked at me. “That’s not true—” Dale’s phone buzzed. “According to Phil . . .” I rolled my eyes. “Who is an elf!” “What’s wrong with being an elf?” asked Tad. “My teacher, Mrs. Hoselnorp, says everybody has to be somebody and we shouldn’t ’scrimitate.” “Discriminate, dear,” said Mom. Tad stared at me. “Wait. You don’t think elves are REAL!” 15

Uncle Dale stared at me. “Ignoring Christmas? Elf doubt? We’re not filling Santa’s tank here, Bobbie.” Tad pointed at me. “Mom! Make Bobbie fill Santa’s tank!” Mom said, “Bobbie, work with me here! You’re the big sister. Please. Act your age.” All I wanted to do was ignore Christmas. Which seemed pretty reasonable when you consider Christmas ATTACKED me! But no one was listening to me—probably because it’s hard to hear an invisible person. Christmas was bullying me again. So I decided to follow rule number three of the anti-bullying list: RUN! “MOM!” yelled Tad. “Bobbie!” yelled Mom. 16

Little did I know, I was just getting started.

Mom let me stew in my room for a while. She knew I needed some time before her Mom-sense would have any effect on me. Mom-sense is like common sense, only it smells better. I was staring at my cast, wishing I had laser-beam eyes to burn it off, when I noticed Mom at the door. “Why haven’t you let anyone sign your cast?” I didn’t say anything. “Is it a part of this whole ignore-Christmas thing?” BINGO. 18

She grabbed a pen off my desk, sat down next to me on the bed, and wrote on my cast. I didn’t look because I knew she wanted me to look. “Honey, I know you’re angry,” she said. “But you can’t take it out on Tad. He needs Christmas. With everything we have going on right now he needs to believe in something.

“I guess you’re not going to talk to me?” Mom said. I stared at my shoes. “That’s okay, you’ll talk when you’re ready,” she added. After she left, I looked at my cast.

After an hour of staring at the ketchup stain on my bedroom ceiling from when Tad and I played splatter tag, I remembered something important.

I got up and went downstairs. Just outside the kitchen I stopped. I could hear Mom talking to Dad over video chat.

Mom said, “I know. Bobbie will be crushed. By the way, she now hates Christmas.” I don’t hate Christmas. I’m ignoring Christmas. Big difference. “What? She loves Christmas,” said Dad. “She thinks Christmas attacked her when she fell off the roof, so now she’s getting even,” Mom explained. Not getting even. IGNORING. See! Nobody listens. “That doesn’t sound like her,” said Dad. “And your brother isn’t helping the situation with his . . . you know, theories.” “Yeah. Dale’s . . . you know, Dale. But he gets even more Dale around Christmas.” “It’s not just him. It’s this whole situation,” said Mom. “You gone. Me working all the time. Bobbie’s just acting out.” “Maybe I should come home after all.” YES! YES! “No. We can’t afford it,” said Mom. “She’ll be fine. Now, what about the video-game thingy that Tad wants?” “Are you kidding? Bobbie’s broken wrist really set us back. Isn’t there something else we can get him?” What? My . . . wrist? 21

“That’s all he wants,” said Mom. “I’m working as many shifts as they’ll allow.” “Same here,” said Mom. “Can’t we just get him a new sweater or something?” I’d heard enough. Not only had I ruined Tad’s night, but my stupid broken wrist had blown any chance of him getting a 3D Mega Machine! Is my ignoring Christmas really messing up everyone’s Christmas? Could Uncle Dale be right? Check out the first three chapters of the middle grade Christmas novel, The Naughty List. Join Bobbie as she travels to the North Pole with...

Check out the first three chapters of the middle grade Christmas novel, The Naughty List. Join Bobbie as she travels to the North Pole with...