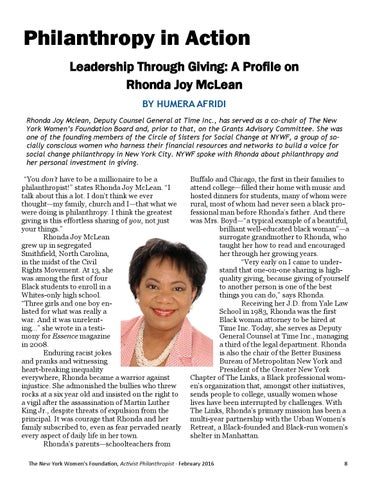 Philanthropy in Action Leadership Through Giving: A Profile on Rhonda Joy McLean BY HUMERA AFRIDI Rhonda Joy Mclean, Deputy Counsel General at Time Inc., has served as a co-chair of The New York Women’s Foundation Board and, prior to that, on the Grants Advisory Committee. She was one of the founding members of the Circle of Sisters for Social Change at NYWF, a group of socially conscious women who harness their financial resources and networks to build a voice for social change philanthropy in New York City. NYWF spoke with Rhonda about philanthropy and her personal investment in giving. “You don’t have to be a millionaire to be a philanthropist!” states Rhonda Joy McLean. “I talk about this a lot. I don’t think we ever thought—my family, church and I—that what we were doing is philanthropy. I think the greatest giving is this effortless sharing of you, not just your things.” Rhonda Joy McLean grew up in segregated Smithfield, North Carolina, in the midst of the Civil Rights Movement. At 13, she was among the first of four Black students to enroll in a Whites-only high school. “Three girls and one boy enlisted for what was really a war. And it was unrelenting…” she wrote in a testimony for Essence magazine in 2008. Enduring racist jokes and pranks and witnessing heart-breaking inequality everywhere, Rhonda became a warrior against injustice. She admonished the bullies who threw rocks at a six year old and insisted on the right to a vigil after the assassination of Martin Luther King Jr., despite threats of expulsion from the principal. It was courage that Rhonda and her family subscribed to, even as fear pervaded nearly every aspect of daily life in her town. Rhonda’s parents—schoolteachers from

Buffalo and Chicago, the first in their families to attend college—filled their home with music and hosted dinners for students, many of whom were rural, most of whom had never seen a black professional man before Rhonda’s father. And there was Mrs. Boyd—“a typical example of a beautiful, brilliant well-educated black woman”—a surrogate grandmother to Rhonda, who taught her how to read and encouraged her through her growing years. “Very early on I came to understand that one-on-one sharing is highquality giving, because giving of yourself to another person is one of the best things you can do,” says Rhonda. Receiving her J.D. from Yale Law School in 1983, Rhonda was the first Black woman attorney to be hired at Time Inc. Today, she serves as Deputy General Counsel at Time Inc., managing a third of the legal department. Rhonda is also the chair of the Better Business Bureau of Metropolitan New York and President of the Greater New York Chapter of The Links, a Black professional women’s organization that, amongst other initiatives, sends people to college, usually women whose lives have been interrupted by challenges. With The Links, Rhonda’s primary mission has been a multi-year partnership with the Urban Women’s Retreat, a Black-founded and Black-run women’s shelter in Manhattan.