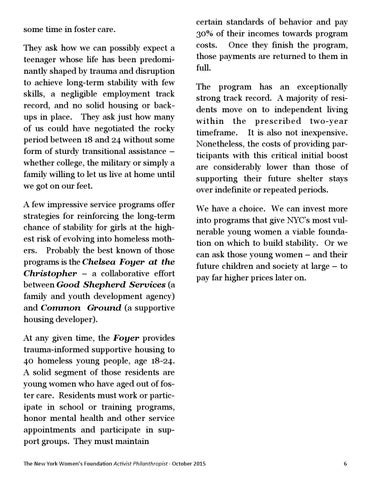 some time in foster care. They ask how we can possibly expect a teenager whose life has been predominantly shaped by trauma and disruption to achieve long-term stability with few skills, a negligible employment track record, and no solid housing or backups in place. They ask just how many of us could have negotiated the rocky period between 18 and 24 without some form of sturdy transitional assistance – whether college, the military or simply a family willing to let us live at home until we got on our feet. A few impressive service programs offer strategies for reinforcing the long-term chance of stability for girls at the highest risk of evolving into homeless mothers. Probably the best known of those programs is the Chelsea Foyer at the Christopher – a collaborative effort between Good Shepherd Services (a family and youth development agency) and Common Ground (a supportive housing developer).

certain standards of behavior and pay 30% of their incomes towards program costs. Once they finish the program, those payments are returned to them in full. The program has an exceptionally strong track record. A majority of residents move on to independent living within the prescribed two-year timeframe. It is also not inexpensive. Nonetheless, the costs of providing participants with this critical initial boost are considerably lower than those of supporting their future shelter stays over indefinite or repeated periods. We have a choice. We can invest more into programs that give NYC’s most vulnerable young women a viable foundation on which to build stability. Or we can ask those young women – and their future children and society at large – to pay far higher prices later on.

At any given time, the Foyer provides trauma-informed supportive housing to 40 homeless young people, age 18-24. A solid segment of those residents are young women who have aged out of foster care. Residents must work or participate in school or training programs, honor mental health and other service appointments and participate in support groups. They must maintain The New York Women’s Foundation Activist Philanthropist · October 2015