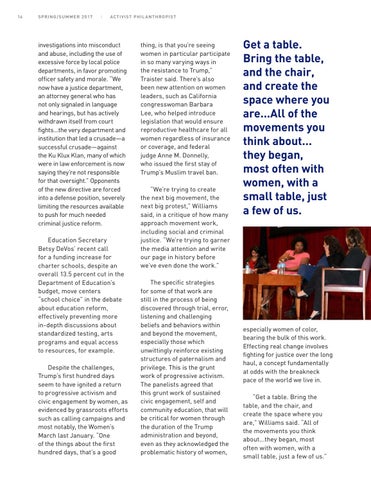 investigations into misconduct and abuse, including the use of excessive force by local police departments, in favor promoting officer safety and morale. “We now have a justice department, an attorney general who has not only signaled in language and hearings, but has actively withdrawn itself from court fights...the very department and institution that led a crusade—a successful crusade—against the Ku Klux Klan, many of which were in law enforcement is now saying they’re not responsible for that oversight.” Opponents of the new directive are forced into a defense position, severely limiting the resources available to push for much needed criminal justice reform. Education Secretary Betsy DeVos’ recent call for a funding increase for charter schools, despite an overall 13.5 percent cut in the Department of Education’s budget, move centers “school choice” in the debate about education reform, effectively preventing more in-depth discussions about standardized testing, arts programs and equal access to resources, for example. Despite the challenges, Trump’s first hundred days seem to have ignited a return to progressive activism and civic engagement by women, as evidenced by grassroots efforts such as calling campaigns and most notably, the Women’s March last January. “One of the things about the first hundred days, that’s a good

thing, is that you’re seeing women in particular participate in so many varying ways in the resistance to Trump,” Traister said. There’s also been new attention on women leaders, such as California congresswoman Barbara Lee, who helped introduce legislation that would ensure reproductive healthcare for all women regardless of insurance or coverage, and federal judge Anne M. Donnelly, who issued the first stay of Trump’s Muslim travel ban. “We’re trying to create the next big movement, the next big protest,” Williams said, in a critique of how many approach movement work, including social and criminal justice. “We’re trying to garner the media attention and write our page in history before we’ve even done the work.” The specific strategies for some of that work are still in the process of being discovered through trial, error, listening and challenging beliefs and behaviors within and beyond the movement, especially those which unwittingly reinforce existing structures of paternalism and privilege. This is the grunt work of progressive activism. The panelists agreed that this grunt work of sustained civic engagement, self and community education, that will be critical for women through the duration of the Trump administration and beyond, even as they acknowledged the problematic history of women,

Get a table. Bring the table, and the chair, and create the space where you are...All of the movements you think about... they began, most often with women, with a small table, just a few of us.

especially women of color, bearing the bulk of this work. Effecting real change involves fighting for justice over the long haul, a concept fundamentally at odds with the breakneck pace of the world we live in. “Get a table. Bring the table, and the chair, and create the space where you are,” Williams said. “All of the movements you think about...they began, most often with women, with a small table, just a few of us.”