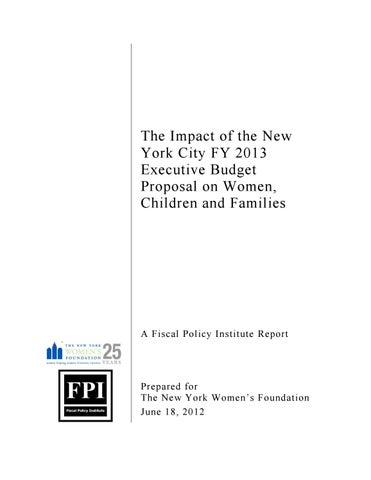 Introduction While New York City’s job growth has exceeded that of the nation over the past year, unemployment remains high, poverty has risen sharply from 19 to 21 percent in the first two years following the onset of the recession, and hardships have mounted for many New York City women, families and children. Unemployment is higher now for women (9.4 percent) than it was at the recession’s low point in the last part of 2009 (9.0 percent), and women who are unemployed have been without a job for an average of 10 months. One of the most striking indicators of heightened hardship is the two-thirds increase in the number of city residents receiving food stamps since the recession began, and that the number continued to increase in 2011 although the “recovery” was in its second year. Homelessness is at record levels with 41,200 people nightly, including 17,000 children, in the city’s shelter system. Shelter demand among unaccompanied homeless women has been steadily rising. Despite growing needs, three years of city budget cuts have frayed the safety net and reduced social services for the poor, making it harder for low-income women to access income and job supports as well as vital supportive services. Budget and economic policies are particularly critical to women because 67 percent of poor families with children are headed by women. Women also are more likely to be responsible for providing care for the elderly, to be low-wage workers, and to have jobs providing services funded by government. Many women work in education, health and social services—the “helping” professions—all areas where government funding is critical and budget cuts have taken a heavy toll. There are again sharp cuts in youth services, deepening the disproportionate impact on homeless and LGBTQ youth.

Budget cuts in the Mayor’s FY 2013 Executive City budget In the face of continued high levels of economic adversity, the $69 billion FY 2013 Executive Budget cuts city spending in several budget areas disproportionately affecting women, children and families, some of which are highlighted below: 

Employment-related programs that help move women out of poverty

The FY 2013 Executive Budget reduces city funding by nearly one-third for programs that increase employment skills and opportunities to move adult public assistance recipients, most of whom are women, to self-sufficiency. This includes $13.9 million from substituting Work Experience Program (WEP) workers for participants in the Parks Opportunity Program (POP), one of the nation’s largest transitional employment programs. 

The Executive Budget provides $53 million less than what is needed to maintain child care services and capacity, and also puts in jeopardy the jobs of hundreds of child care workers, 95 1

percent of whom are women and most of whom are black or Hispanic, groups with very high unemployment rates. Without subsidies, the cost of child care is a substantial financial burden on low-income families and often their single largest expenditure. When low-income parents lose subsidized child care, their ability to continue working may be jeopardized. 

The Executive Budget cuts funding for the Department for the Aging (DFTA) by $22 million for a wide range of services for seniors, including support for senior center operations, case management, meals, transportation, and elder abuse prevention. 

The Executive Budget cuts $7.2 million in city funds for shelter beds and outreach and drop-in services for runaway and homeless youth. More than a quarter of those served identify themselves as lesbian, gay, or bisexual. 

The budget eliminates the $2.0 million in funding for the Teen RAPP program that educates and counsels 50,000 teens annually about domestic violence in middle and high schools. 

The Executive Budget again proposes to eliminate the $1.3 million in funding for the SART program operated by the Health and Hospitals Corporation (HHC). SART provides immediate counseling and state-of-the-art forensic services to sexual assault victims. 

The Executive Budget eliminates $2.5 million in funding for interventions targeting community districts with high infant mortality rates and racial and ethnic disparities in infant mortality. Infant mortality is three times as great in the poorest city neighborhoods as it is in the most affluent communities.1

The Executive Budget eliminates $350,000 in funding for reproductive health and pregnancy prevention services for uninsured and high-risk teens via Planned Parenthood of New York City. 

The FY 2013 Executive Budget cuts family and adult literacy programs by $2.5 million, and eliminates $4 million in funding for the Immigrant Opportunities Initiative. 

Workforce reductions in health and human services, libraries and parks

Personnel reductions totaling 3,900 that are included as part of the FY 2013 Executive Budget will hit hard several areas employing large proportions of women workers, including health and human services, libraries and parks. Health and human services--In the six major agencies in health and human services—the Administration for Children’s Services (ACS), and the Departments for Aging, Social Services, Homeless Services, Youth and Community Development, and Health and Mental Hygiene (DOHMH)—workforce cuts during FY 2013 total 853. The workforce in this area is 69 percent women and 55 percent black or Hispanic women. Health and Hospitals Corporation--HHC staffing levels are projected to decline by 550 during FY 2013. Public Libraries--The Mayor’s budget reduces city funding for the three public library systems by $93 million—over 30 percent—compared to the FY 2012 adopted budget. A budget cut of this magnitude would result in the layoff of 1,565 library staff. This would disproportionately affect women who represent about two-thirds of the city’s public library workforce. Parks--The Executive Budget entails a headcount reduction of 928 in the Parks Department. Fifty-five percent of Parks workers are female and 48 percent are black or Hispanic and female.

City budget areas where prior funding has not been restored or city funds not provided in response to heightened need Since the onset of the recession in 2008, City-funded spending on programs and services in the human services area has increased by less than the inflation rate and only one-third the rate of all other spending in the city budget. Funding for many programs has been reduced during that time, and there are many areas where needs have grown but the City has not responded with additional budget resources. Below are a few examples. 

CUNY community college funding –While CUNY community college enrollment and operating costs are increasing, the Mayor’s FY 2013 budget proposal freezes city spending at last year’s level. Yet CUNY students, nearly half of whom have family incomes of less of $20,000 or less, will have to pay $300 more in tuition, a 9 percent increase over last year. The city’s FY 2012 budget defunded the Vallone Scholarship program, and the Mayor’s FY 3

2013 budget proposal excludes funding for $3.35 million in Council initiatives. Four out of every five CUNY community college students are of color, 60 percent are women, 46 percent are immigrants, and 48 percent speak a native language other than English. 

Transitional homeless rental subsidies--The enacted 2011-2012 state budget eliminated the state and federal share of rental subsidies for single adults and families transitioning out of the homeless shelter system. In the wake of the state budget action to de-fund the $200 million a year program, the city has reduced the city’s share of the rental subsidy program, and has yet to indicate how it will aid families moving out of the shelter system. Of the families in New York City homeless shelters, 89 percent are headed by women.

Newborn Home Visitation—The FY 2012 budget reduced spending on the Newborn Home Visitation program by $742,000, or 40 percent. This resulted in many fewer family home visits in high-poverty neighborhoods in North and Central Brooklyn, the South Bronx, and East and Central Harlem. Through a single home visit, public health advisors help families with a new infant adjust to parenthood, assure that their infants are living in a safe environment, and identify health and social issues, such as post-partum depression, housing instability or domestic violence, that require referral to community-based services.

Advance at Work—The FY 2012 budget ended the remaining $1 million in city funding for the Advance at Work program that helped low-income working adults to advance in the labor market through individual career advancement coaching, access to training and education programs, and employment with work supports.

Conclusion Budget cuts as proposed in the Mayor’s Executive Budget and the budget’s failure to respond to heightened needs jeopardize the outlook for economic improvement and security for many lowincome women and their families. These cuts and funding shortfalls increase the risk of poverty in two ways: by destabilizing those already struggling, and by reducing opportunities to move out of poverty. Removing essential support services undermines individual and family well-being and exacerbates social problems, increasing the need for greater and more costly government interventions in the longer run.

We hope that the Mayor and City Council members will recognize the profound and dangerous severity of the proposed spending cuts that disproportionately affect women and children. It is critical to reduce our Cityâ&amp;#x20AC;&amp;#x2122;s reliance on spending cuts to balance the budget. In so doing, we will mitigate the painful human tradeoffs, particularly in these troubling economic times, and all New Yorkers will benefit.

The New York Womenâ&amp;#x20AC;&amp;#x2122;s Foundation (www.nywf.org) was established in 1987 as a public philanthropy to be a voice for women and a force for change. We are a cross-cultural alliance of women catalyzing partnerships and leveraging human and financial capital to achieve sustained economic security and justice for women and girls. With fierce determination, we mobilize hearts, minds and resources to create an equitable and just future for women, families and communities in New York City.

The Fiscal Policy Institute (www.fiscalpolicy.org) is an independent, nonpartisan, nonprofit research and education organization committed to improving public policies and private practices to better the economic and social conditions of all New Yorkers. Founded in 1991, FPI works to create a strong economy in which prosperity is broadly shared.

A budget is one of the principal ways in which governments express their priorities and values. With this in mind, The New York Women’s Foundation, in partnership with the Fiscal Policy Institute, reviews the proposed Governor’s Budget to determine its impact on NYC’s women and families. When viewed with a gender lens, the Governor’s 2012-2013 budget impacts the city’s low-income women and their families in many ways, from decreased resources for low-income women seeking to get a foothold in the job market, to reduced funding for a wide range of essential support services, including child care. 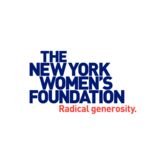