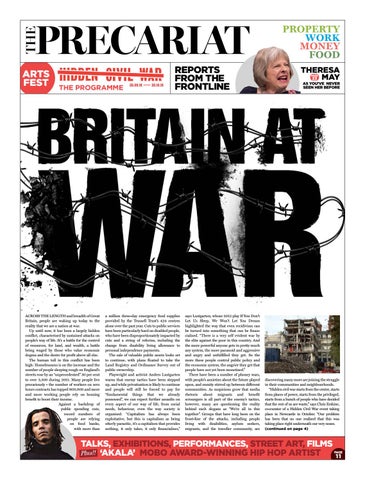 ACROSS THE LENGTH and breadth of Great Britain, people are waking up today to the reality that we are a nation at war. Up until now, it has been a largely hidden conflict, characterised by sustained attacks on people’s way of life. It’s a battle for the control of resources, for land, and wealth, a battle being waged by those who value economic dogma and the desire for profit above all else. The human toll in this conflict has been high: Homelessness is on the increase and the number of people sleeping rough on England’s streets rose by an “unprecedented” 30 per cent to over 3,500 during 2015. Many people live precariously - the number of workers on zero hours contracts has topped 800,000 and more and more working people rely on housing benefit to boost their income. Against a backdrop of public spending cuts, record numbers of people are relying on food banks, with more than

REPORTS FROM THE FRONTLINE

a million three-day emergency food supplies provided by the Trussell Trust’s 424 centres alone over the past year. Cuts to public services have been particularly hard on disabled people, who have been disproportionately impacted by cuts and a string of reforms, including the change from disability living allowance to personal independence payments. The sale of valuable public assets looks set to continue, with plans floated to take the Land Registry and Ordinance Survey out of public ownership. Playwright and activist Anders Lustgarten warns that enemy tactics have been stepped up, and while privatisation is likely to continue and people will still be forced to pay for “fundamental things that we already possessed”, we can expect further assaults on every aspect of our way of life, from social needs, behaviour, even the way society is organised: “Capitalism has always been exploitative, but this is capitalism as being utterly parasitic, it’s a capitalism that provides nothing, it only takes, it only financialises,”

says Lustgarten, whose 2013 play If You Don’t Let Us Sleep, We Won’t Let You Dream highlighted the way that even recidivism can be turned into something that can be financialised. “There is a very self evident war by the elite against the poor in this country. And the more powerful anyone gets in pretty much any system, the more paranoid and aggressive and angry and unfulfilled they get. So the more these people control public policy and the economic system, the angrier they get that people have not yet been monetised.” There have been a number of phoney wars, with people’s anxieties about the future played upon, and enmity stirred up between different communities. As suspicions grow that media rhetoric about migrants and benefit scroungers is all part of the enemy’s tactics, however, many are questioning the reality behind such slogans as “We’re all in this together”. Groups that have long been on the front-line of the attacks, including people living with disabilities, asylum seekers, migrants, and the traveller community, are

AS YOU’VE NEVER SEEN HER BEFORE

discovering many more are joining the struggle in their communities and neighbourhoods. “Hidden civil war starts from the centre, starts from places of power, starts from the privileged, starts from a bunch of people who have decided that the rest of us are waste,” says Chris Erskine, co-curator of a Hidden Civil War event taking place in Newcastle in October. “Our problem has been that no one realised that this was taking place right underneath our very noses. (continued on page 4) 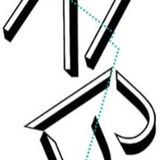 The Precariat accompanies Hidden Civil War, a month long programme of activity in Newcastle upon Tyne, commissioned by The NewBridge Project...

The Precariat accompanies Hidden Civil War, a month long programme of activity in Newcastle upon Tyne, commissioned by The NewBridge Project...