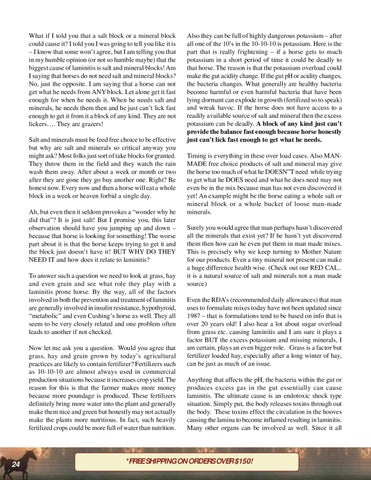 What if I told you that a salt block or a mineral block could cause it? I told you I was going to tell you like it is – I know that some won’t agree, but I am telling you that in my humble opinion (or not so humble maybe) that the biggest cause of laminitis is salt and mineral blocks! Am I saying that horses do not need salt and mineral blocks? No, just the opposite. I am saying that a horse can not get what he needs from ANY block. Let alone get it fast enough for when he needs it. When he needs salt and minerals, he needs them then and he just can’t lick fast enough to get it from it a block of any kind. They are not lickers…. They are grazers! Salt and minerals must be feed free choice to be effective but why are salt and minerals so critical anyway you might ask? Most folks just sort of take blocks for granted. They throw them in the field and they watch the rain wash them away. After about a week or month or two after they are gone they go buy another one. Right? Be honest now. Every now and then a horse will eat a whole block in a week or heaven forbid a single day. Ah, but even then it seldom provokes a “wonder why he did that”? It is just salt! But I promise you, this later observation should have you jumping up and down – because that horse is looking for something! The worse part about it is that the horse keeps trying to get it and the block just doesn’t have it! BUT WHY DO THEY NEED IT and how does it relate to laminitis? To answer such a question we need to look at grass, hay and even grain and see what role they play with a laminitis prone horse. By the way, all of the factors involved in both the prevention and treatment of laminitis are generally involved in insulin resistance, hypothyroid, “metabolic” and even Cushing’s horse as well. They all seem to be very closely related and one problem often leads to another if not checked. Now let me ask you a question. Would you agree that grass, hay and grain grown by today’s agricultural practices are likely to contain fertilizer? Fertilizers such as 10-10-10 are almost always used in commercial production situations because it increases crop yield. The reason for this is that the farmer makes more money because more poundage is produced. These fertilizers definitely bring more water into the plant and generally make them nice and green but honestly may not actually make the plants more nutritious. In fact, such heavily fertilized crops could be more full of water than nutrition.

Also they can be full of highly dangerous potassium – after all one of the 10’s in the 10-10-10 is potassium. Here is the part that is really frightening – if a horse gets to much potassium in a short period of time it could be deadly to that horse. The reason is that the potassium overload could make the gut acidity change. If the gut pH or acidity changes, the bacteria changes. What generally are healthy bacteria become harmful or even harmful bacteria that have been lying dormant can explode in growth (fertilized so to speak) and wreak havoc. If the horse does not have access to a readily available source of salt and mineral then the excess potassium can be deadly. A block of any kind just can’t provide the balance fast enough because horse honestly just can’t lick fast enough to get what he needs. Timing is everything in these over load cases. Also MANMADE free choice products of salt and mineral may give the horse too much of what he DOESN”T need while trying to get what he DOES need and what he does need may not even be in the mix because man has not even discovered it yet! An example might be the horse eating a whole salt or mineral block or a whole bucket of loose man-made minerals. Surely you would agree that man perhaps hasn’t discovered all the minerals that exist yet? If he hasn’t yet discovered them then how can he even put them in man made mixes. This is precisely why we keep turning to Mother Nature for our products. Even a tiny mineral not present can make a huge difference health wise. (Check out our RED CAL.. it is a natural source of salt and minerals not a man made source) Even the RDA’s (recommended daily allowances) that man uses to formulate mixes today have not been updated since 1987 – that is formulations tend to be based on info that is over 20 years old! I also hear a lot about sugar overload from grass etc. causing laminitis and I am sure it plays a factor BUT the excess potassium and missing minerals, I am certain, plays an even bigger role. Grass is a factor but fertilizer loaded hay, especially after a long winter of hay, can be just as much of an issue. Anything that affects the pH, the bacteria within the gut or produces excess gas in the gut essentially can cause laminitis. The ultimate cause is an endotoxic shock type situation. Simply put, the body releases toxins through out the body. These toxins effect the circulation in the hooves causing the lamina to become inflamed resulting in laminitis. Many other organs can be involved as well. Since it all 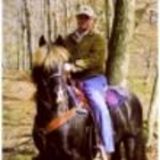