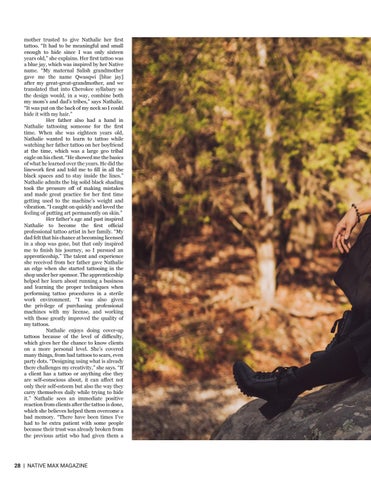 mother trusted to give Nathalie her first tattoo. “It had to be meaningful and small enough to hide since I was only sixteen years old,” she explains. Her first tattoo was a blue jay, which was inspired by her Native name. “My maternal Salish grandmother gave me the name Qwasqwi [blue jay] after my great-great-grandmother, and we translated that into Cherokee syllabary so the design would, in a way, combine both my mom’s and dad’s tribes,” says Nathalie. “It was put on the back of my neck so I could hide it with my hair.” Her father also had a hand in Nathalie tattooing someone for the first time. When she was eighteen years old, Nathalie wanted to learn to tattoo while watching her father tattoo on her boyfriend at the time, which was a large geo tribal eagle on his chest. “He showed me the basics of what he learned over the years. He did the linework first and told me to fill in all the black spaces and to stay inside the lines.” Nathalie admits the big solid black shading took the pressure off of making mistakes and made great practice for her first time getting used to the machine’s weight and vibration. “I caught on quickly and loved the feeling of putting art permanently on skin.” Her father’s age and past inspired Nathalie to become the first official professional tattoo artist in her family. “My dad felt that his chance at becoming licensed in a shop was gone, but that only inspired me to finish his journey, so I pursued an apprenticeship.” The talent and experience she received from her father gave Nathalie an edge when she started tattooing in the shop under her sponsor. The apprenticeship helped her learn about running a business and learning the proper techniques when performing tattoo procedures in a sterile work environment. “I was also given the privilege of purchasing professional machines with my license, and working with those greatly improved the quality of my tattoos. Nathalie enjoys doing cover-up tattoos because of the level of difficulty, which gives her the chance to know clients on a more personal level. She’s covered many things, from bad tattoos to scars, even party dots. “Designing using what is already there challenges my creativity,” she says. “If a client has a tattoo or anything else they are self-conscious about, it can affect not only their self-esteem but also the way they carry themselves daily while trying to hide it.” Nathalie sees an immediate positive reaction from clients after the tattoo is done, which she believes helped them overcome a bad memory. “There have been times I’ve had to be extra patient with some people because their trust was already broken from the previous artist who had given them a 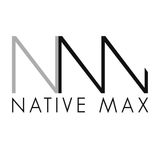