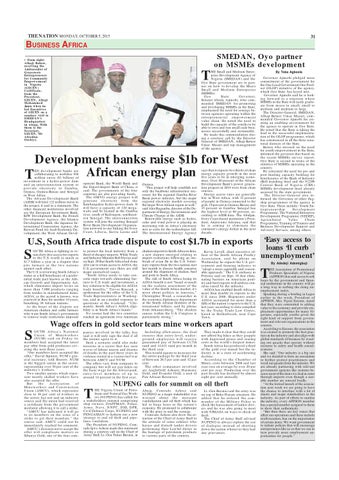 • From right: Alhaji Bature, receiving the Ambassador of Grassroots Entrepreneurs for Community Empowerment in Nigeria (GECEN) Certificate, from the President, GECEN, Alhaji Mohammed Jamu when he led Executives of GECEN on a courtesy visit to SMEDAN’s Headquarters in Abuja. With them is the Secretary, GECEN, Mr Abiodun Orebiyi.

HE Small and Medium Enterprise Development Agency of Nigeria (SMEDAN) and the Oyo State government are to partner on how to develop the Micro Small and Medium Enterprises (MSMEs) Oyo State Governor, Senator Abiola Ajimobi, who commended SMEDAN for promoting and developing MSMEs in the State, emphasised the need for synergy between agencies operating within the entrepreneurial empowerment value chain. He noted the need to build the capacity of the youths to be able to own and run small ccale businesses successfully and sustainably. He made this commendation during a courtesy call by the Director General of SMEDAN, Alhaji Bature Umar Masari and top management of the agency.

opment Bank, the World Bank and the Export-Import Bank of China, it said. The governments of the four countries are also providing funds. The OMVG energy project will generate electricity from the Sambangalou hydro-power dam. It will have a capacity of 120 megawatts and be located in the Gambia river, south of Kedougou, southeastern Senegal. The interconnection system will join the existing Senegal River Basin Development Organization network to one linking the Ivory Coast, Liberia, Sierra Leone and

Guinea. “This project will help establish not only the backbone infrastructure necessary for the regional Gambia River Basin power industry, but the major regional electricity market covering the larger West African region as well,” said Alex Rugamba, director of the Department of Energy, Environment and Climate Change at the AfDB. Renewable energy such as hydro, solar and wind power is playing an increasing role in Africa’s electricity mix as costs for the technologies fall. The International Energy Agency

says that it expects two thirds of clean energy capacity growth in the next five years to be in emerging economies. Over 80 percent of the African Development Bank’s power generation projects in 2014 were from clean sources. Energy access rates are generally low in West Africa, with 12 percent of people in Guinea connected to the grid, 19 percent in Guinea-Bissau and 35 percent in Gambia. Senegal has the highest level at 60 percent, according to AfDB data. The Abidjan, Ivory Coast-based institution’s President, Akinwumi Adesina, said that he is aiming to eliminate the continent’s energy deficit in the next decade.

U.S, South Africa trade dispute to cost $1.7b in exports

OUTH Africa is fighting to retain duty-free access for exports to the U.S. worth as much as $1.7 billion a year in a dispute that pits farmers in the two nations against each other. The U.S. is reviewing South Africa’s status as a full beneficiary of a preferential trade pact known as the African Growth and Opportunity Act, which eliminates import levies on more than 7,000 products ranging from textiles to manufactured items. AGOA, as the accord is known, was renewed in June for another 10 years, benefiting 39 African nations. At the heart of the dispute are American chicken and cattle farmers who want South Africa’s government to remove trade restrictions imposed

to protect the local industry from a flood of cheaper imports. While Trade and Industry Minister Rob Davies said on Sept. 29 that South Africa had done all it can to retain access to AGOA, the U.S. government says there are still major unresolved issues. “South Africa needs to take concrete steps towards eliminating barriers to U.S. trade and investment, a key criterion to be eligible for AGOA trade benefits,” Trevor Kincaid, a spokesman for the office of the U.S. Trade Representative in Washington, said in an e-mailed response to questions at the weekend. “Ultimately, South Africa’s AGOA eligibility is in South Africa’s hands.” No sooner had the two countries reached an agreement over American

chicken imports to South Africa in June, a new dispute emerged relating to import restrictions following an outbreak of avian flu in the U.S. Veterinary experts from the two nations met last month to discuss health concerns around the shipment of chicken, beef and pork to South Africa. The risk of South Africa losing its AGOA benefit is not “based so much on the realistic assessment of the value of the South Africa market, it’s more about politics in America,” Christopher Wood, a researcher in the economic diplomacy department at the South African Institute of International Affairs, said by phone from Johannesburg. “The chicken caucus within the U.S. Congress is particularly strong.”

Kevin Lovell, chief executive officer of the South African Poultry Association, said by phone on Wednesday he expects the U.S. government and farming industry to “adopt a more equitable and reasonable approach.” The U.S. embassy in Pretoria said on Sept. 16 that eliminating barriers on American poultry and beef exports will address concerns raised by the industry. AGOA has enabled South Africa to more than double its exports to the U.S. since 2000. Shipments under AGOA accounted for more than a fifth of the nation’s exports to the U.S. last year, according to data compiled by the Tralac Trade Law Centre, based in Stellenbosch, near Cape Town.

OUTH Africa’s National Union of Mineworkers (NUM) said on Friday its members had accepted the latest pay offer from gold producers covering the next three years. “Our members have accepted the offer,” David Sipunzi, NUM’s general secretary, told Reuters. NUM is the biggest union in the sector, representing over 50 per cent of the industry’s workers. Two smaller unions which represent mostly skilled workers have also accepted the offer. But the Association of Mineworkers and Construction Union (AMCU), which represents close to 30 per cent of workers in the sector, has not and an industry source said the union had received a certificate from the government mediator allowing it to call a strike. “AMCU has indicated it will go to its members on the issue of a strike to get their mandate,” the source said. AMCU could not be immediately reached for comment. AMCU’s decision not to accept the offer will complicate matters as Sibanye Gold, one of the four com-

panies involved in the talks, has said it will only sign the deal if all the unions agree to it. Such a scenario could also stoke tensions in a sector that has seen waves of labour unrest and dozens of deaths in the past three years in violence rooted in a vicious turf war between AMCU and NUM. The offers vary from company to company but will see pay hikes on the basic wage for the lowest-paid, entry-level members of up to around 14 percent in the first year.

Including allowances, the deal ensures that entry-level, underground employees will receive guaranteed pay of between 13,728 rand and 14,611 rand per month in the third year. This would equate to increases for the entire package by the third year of between 26.5 per cent and 32 per cent. The other companies involved are AngloGold Ashanti, Harmony Gold, and Evander Gold, a unit of Pan African Resources.

They made it clear that they could not afford big hikes as they grapple with depressed prices and soaring costs in the world’s deepest mines. South Africa has produced a third of the gold ever mined but the industry is in a state of accelerating decline. According to the Chamber of Mines, costs between 2008 and last year rose on average by over 20 per cent per year. Production over the past decade has declined by almost eight per cent annually.

HE Nigeria Union of Petroleum and Natural Gas Workers (NUPENG) has called for a stakeholders summit comprising ship owners, DAPPMAN, Police, Army, Navy, NNPC, DSS, DPR, Civil Defence Corps, NUPENG and PENGASSAN to fashion out a new strategy to end oil theft and pipelines vandalism. The President of NUPENG, Comrade Igwe Achese made this statement during a courtesy call on the Chief of Army Staff, Lt.-Gen Tukur Buratai, in

Abuja. Comrade Achese said NUPENG as a major stakeholder was worried about the incessant vandalisation and oil theft which has led to huge loses to the nation’s economy. He promised to collaborate with the army to end the scourge. Comrade Achese also drew the attention of the Chief of Army Staff to the attitude of some soldiers who harass and disturb tanker drivers performing their Lawful duties in the haulage of petroleum products to various parts of the country.

Lt.-Gen Buratai said the army was on top of Boko Haram situation. He added that he ordered the commander of the Military Police to check the harassment of tanker drivers and he was also going to meet with NIMASA on ways to check oil theft. The Chief of Army Staff advised NUPENG to always explore the use of dialogue instead of shutting down the nation whenever they had any grievances.

Governor Ajimobi pledged more commitment of the government for the One Local Government One Product (OLOP) initiative of the agency, which Oyo State has keyed into. Governor Ajimobi said he is looking forward to a situation where MSMEs in the State will easily graduate from micro to small, small to medium and medium to large. The Director-General, SMEDAN, Alhaji Bature Umar Masari, commended Governor Ajimobi for creating an enabling environment for the agency to operate in Oyo State. He noted that the State is taking the lead in the successful implementation of the OLOP programme, which has commenced in all the three senatorial districts of the State. Bature who stressed on the need for youth empowerment in the State, informed the governor that based on the recent MSMEs survey report, Oyo State is second in terms of the statistics of MSMEs operating in the country. He reiterated the need for pre and post funding capacity building for beneficiaries of the Bank of Industry (BoI) matching fund and the N220b Central Bank of Nigeria (CBN) MSMEs development fund already accessed by the state government. The Director-General also informed the Governor of other flagship programmes of the agency in Oyo State. These include: Youth Entrepreneurship Development Programme, The National Enterprise Development Programme (NEDEP), Agricultural Value Chain Programme, Training of Trainers and Business Development Support and Advisory Services, among others.

HE Association of Promotional Products Specialists of Nigeria (APPSON) has said access to soft loans by the government and financial institutions in the country will go a long way in curbing the rising unemployment index. Speaking during a briefing in Lagos earlier in the week, President of APPSON, Mrs. Ngozi Ezeonu, stated that they were committed to adding value to the economy and provide employment opportunities for many Nigerians, especially youths given the right kind of support from government and relevant organisations in the country. According to Ezeonu, the association was created to promote the best practices in the industry and also align with global standards of business by weeding out quacks that operate without recourse to safety and health considerations. She said: “Our industry is a big one and we decided to form an association to further protect practitioners and weed out quacks from the industry. We are already partnering with relevant government agencies like customs because most of the items we deal in come through imports even though a sizeable number are sourced locally. “At the formal launch of the association next week we are going to have the chance to interface with a lot of clients and major stakeholders in the industry. As part of efforts to sanitise the industry, every APPSON member has a special number assigned to them to show their authenticity. “But then there are key issues that affect our operations and these include multi-taxation, ban on the importation of certain items. We want government to initiate policies that will encourage entrepreneurs like us so that we can in turn provide more employment opportunities for people.’’ 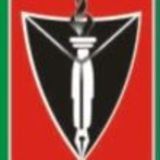 The Nation Publication for Monday 5th of October, 2015.

The Nation Publication for Monday 5th of October, 2015.