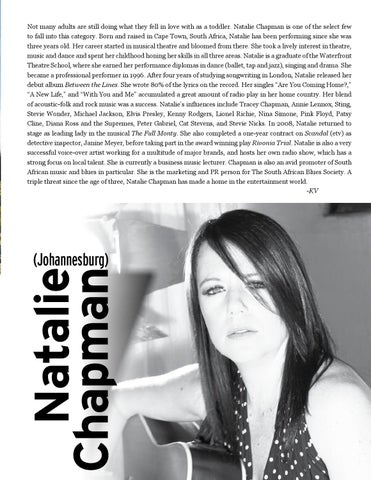 Not many adults are still doing what they fell in love with as a toddler. Natalie Chapman is one of the select few to fall into this category. Born and raised in Cape Town, South Africa, Natalie has been performing since she was three years old. Her career started in musical theatre and bloomed from there. She took a lively interest in theatre, music and dance and spent her childhood honing her skills in all three areas. Natalie is a graduate of the Waterfront Theatre School, where she earned her performance diplomas in dance (ballet, tap and jazz), singing and drama. She became a professional performer in 1996. After four years of studying songwriting in London, Natalie released her debut album Between the Lines. She wrote 80% of the lyrics on the record. Her singles “Are You Coming Home?,” “A New Life,” and “With You and Me” accumulated a great amount of radio play in her home country. Her blend of acoustic-folk and rock music was a success. Natalie’s influences include Tracey Chapman, Annie Lennox, Sting, Stevie Wonder, Michael Jackson, Elvis Presley, Kenny Rodgers, Lionel Richie, Nina Simone, Pink Floyd, Patsy Cline, Diana Ross and the Supremes, Peter Gabriel, Cat Stevens, and Stevie Nicks. In 2008, Natalie returned to stage as leading lady in the musical The Full Monty. She also completed a one-year contract on Scandal (etv) as detective inspector, Janine Meyer, before taking part in the award winning play Rivonia Trial. Natalie is also a very successful voice-over artist working for a multitude of major brands, and hosts her own radio show, which has a strong focus on local talent. She is currently a business music lecturer. Chapman is also an avid promoter of South African music and blues in particular. She is the marketing and PR person for The South African Blues Society. A triple threat since the age of three, Natalie Chapman has made a home in the entertainment world. -KV 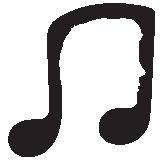