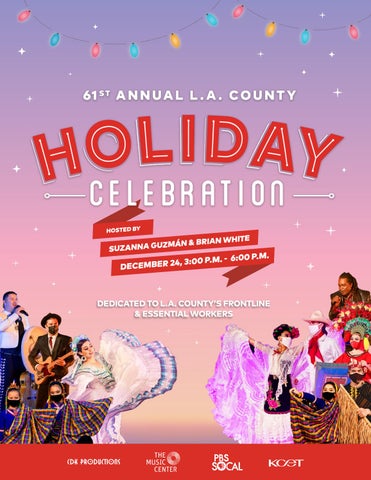 ABOUT THE CELEBRATION As Los Angeles’ largest multicultural holiday celebration, the 61 st Annual L.A. County Holiday Celebration is presented by the Los Angeles County Board of Supervisors. An example of the county’s commitment to equity and inclusion, this joyous performance provides Angelenos of all ages an opportunity to come together on December 24 to experience and honor the dynamic, rich cultures of Los Angeles. During the free show, many diverse L.A.-based artists — including community-based and professional choirs, music ensembles and dance companies — showcase their talent, artistry and traditions on location throughout L.A. County including at Jerry Moss Plaza at The Music Center. The three-hour production features instrumental music, song and dance performances.

The 61 st Annual L.A. County Holiday Celebration is dedicated to the first responders and essential workers of L.A. County. The County of Los Angeles and The Music Center celebrate and thank these real heroes for putting themselves on the front lines in 2020 and helping make this holiday season possible.

HISTORY The L.A. County Holiday Celebration was founded in 1959 by the late Kenneth Hahn, who served as supervisor of the Second District of Los Angeles County from 1952-1992. An advocate for the arts, Supervisor Hahn developed the idea of a free daylong concert along the lines of a neighborhood talent show. When pioneering arts leader Dorothy Buffum Chandler asked Supervisor Hahn to support her plan to build an arts complex in Downtown Los Angeles, Hahn agreed, as long as the performing arts center would open its doors to the public for free every Christmas Eve. While The Music Center was under construction, the holiday show was held at the Los Angeles Sports Arena, and, in ensuing years, in the supervisors’ hearing room. Once The Music Center’s Dorothy Chandler Pavilion opened in 1964, the show was held in the new 3,100 seat auditorium, where it has continued to the delight of audiences of all ages for six decades. This year, because of COVID-19 restrictions and precautions, the 61st Annual Holiday Celebration transformed into a prerecorded celebration of the holidays, shot in locations around the county, but remains a tribute to the talent and diversity of the artists and cultures that comprise L.A. Over the years, the supervisors from all five county districts have supported the event. Today, the Board of Supervisors includes the Honorable Hilda L. Solis, First District, Chair; the Honorable Holly J. Mitchell Second District; the Honorable Sheila Kuehl, Third District; the Honorable Janice Hahn, Fourth District; and the Honorable Kathryn Barger, Fifth District.

The show was produced for many years by the Los Angeles County Arts Commission, now known as the Los Angeles County Department of Arts and Culture. There are 15 arts commissioners named by the Board of Supervisors. They include: Tim Dang, Helen Hernandez and Norma Provencio Pichardo (First District); Pamela Bright-Moon, Eric Hanks and Hope Warschaw (Second District); Madeline Di Nonno, Constance Jolcuvar and Rosalind Wyman (Third District); Darnella Davidson, Eric R. Eisenberg and Liz Schindler Johnson (Fourth District); and Alis Clausen Odenthal, Bettina Korek and Liane Weintraub (Fifth District). While more than 6,000 people traditionally attend the Holiday Celebration at The Music Center in person, the show reaches all over Los Angeles County and beyond with a live broadcast on PBS SoCal. It repeats on PBS SoCal 1 on December 24 and 25, on PBS SoCal 2 on December 25 and on KCET on December 25. Holiday revelers can also stream on pbssocal.org, kcet.org and holidaycelebration.org. The 60th Annual L.A. County Holiday Celebration was named the winner of a 2020 Los Angeles Emmy® Award for Live Special Events Programming. The same Emmy-winning team, led by the program’s 25-year producer and director Kenneth Shapiro, developed this year’s program, which is a production of The Music Center and PBS SoCal in association with CDK Productions.

L.A. COUNTY ARTISTS SHINE A LIGHT ON THE HOLIDAYS

APPLICATION PROCESS The performers for the Holiday Celebration are selected via an annual public application process, which opens in April and concludes in August. Interested performing groups complete an application and provide video with their applications. This year, selections were made during an extensive review process by The Music Center. Reviewers endeavored to select participants who reflect the diversity of Los Angeles. Visit holidaycelebration.org to learn more and apply.

THE 61 st ANNUAL L.A. COUNTY HOLIDAY CELEBRATION A Los Angeles holiday tradition presented in conjunction with The Music Center since 1959, the 61 st Annual L.A. County Holiday Celebration takes on a vibrant new format for 2020. Filmed on location at both The Music Center’s Dorothy Chandler Pavilion and Jerry Moss Plaza and at sites around Los Angeles County, the beloved three-hour showcase of 22 L.A.-based performing groups features choirs, music ensembles and dance companies representing the many cultures of Los Angeles.

Sean Oliu and The Coastline Cowboys

The Opera Company & Orchestra at LACHSA

SUZANNA GUZMÁN Suzanna Guzmán, mezzo-soprano, is a native of East Los Angeles and one of LA Opera’s original associate artists. She has appeared as a principal soloist with orchestras and opera houses around the world including the Metropolitan Opera, Washington National Opera, Dallas Opera, Opera de Genéve and San Diego Opera, to name a few. In 2019, Guzmán appeared in Ragnar Kjartansson’s epic work Bliss, the 12-hour Mozart marathon, as Madame de la Halterre with Opera Del Wests acclaimed Cendrillon, and continues to hold the record for most female principal roles sung by an artist with LA Opera: over 400 performances. An advocate of arts education, Guzmán regularly performs her one-woman show, Don’t Be Afraid; It’s Just Opera! across the United States and is widely recognized for her mentorship to California students. Her acknowledgements include the 2012 Hispanic Scholarship Foundation’s Mentor of the Year Award, the 2012 Spirit of California Award from the State of California’s Latino Legislative Caucus, the 2013 Mexican American Foundation Award for Woman of the Year and the 2015 Lifetime Achievement Award from the Nederlander Organization for her work in the arts and the community. Guzmán serves on the USC Thornton School of Music Board of Councilors, on UCLA’s Design for Sharing board, and received her honorary PhD in Music from Occidental College. She acted as host for the Emmy-nominated 59th

and 60th Annual L.A. County Holiday Celebration as well as for the KCET television show Open Call, a showcase for Los Angeles’ vibrant arts community. During her tenure as director of community engagement for the L.A. County High School for the Arts, Guzmán helped develop programs that served over 13,000 K-12 students annually, bringing them to their first symphony, ballet and musical theatre performance.

BRIAN WHITE Brian White, back for his fourth year as co-host of the L.A. County Holiday Celebration, is an accomplished television, film actor and producer, most known for his roles on Showtime’s Ray Donovan, NBC’s Taken, NBC’s Chicago Fire and ABC’s Scandal as Kerry Washington’s love interest. White starred in and produced the feature films Howard High, Only for One Night , and 36 Hour Layover. After college, White was signed to the New England Patriots; however, his career was cut short due to injury. He then began a lucrative modeling career and co-founded a professional dance and theatre company, Phunk Phenomenon Urban Dance Theater Company, which uses the art of dance as a catalyst for youth outreach. “Phunk” has visited over 200 schools and has collaborated with MTV, the NBA, the WNBA and more; the company has performed with Britney Spears, TLC, Run DMC and Alvin Ailey American Dance Theater. While developing “Phunk,” White seized an opportunity to work on the television show Moesha in Los Angeles. This opportunity kick-started his acting career and allowed him to steadily grow in the entertainment industry.

WE WANT TO HEAR FROM YOU We’d love to know what you think of the show! Please tell us by taking our survey at the link below. We’ll randomly select one participant for a $100 Visa gift card. Please note: Some restrictions may apply. http://bit.ly/LA-CountyHoliday-Celebration

Interested in performing in the 62 nd Annual L.A. County Holiday Celebration on December 24, 2021, or know a group or artist who might like to perform? Opportunities are available for anyone who lives in Los Angeles County. Applications will be available in April 2021. Visit holidaycelebration.org in the spring for more details.

WITH SPECIAL THANKS TO With a vibrant new format, the 61st Annual L.A. County Holiday Celebration is a holiday tradition that offers Angelenos of all ages the oppo...

With a vibrant new format, the 61st Annual L.A. County Holiday Celebration is a holiday tradition that offers Angelenos of all ages the oppo...