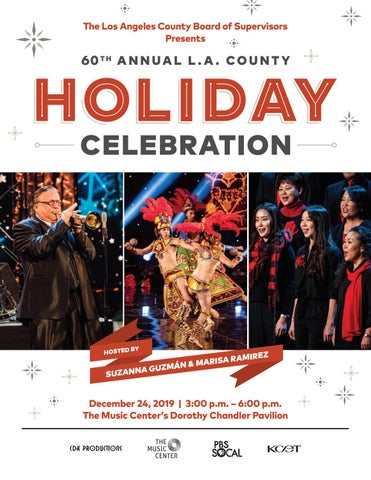 The Los Angeles County Board of Supervisors Presents

Our Lady of the Angels Children’s Chorus

ABOUT THE CELEBRATION As Los Angeles’ largest multicultural holiday celebration, the 60th annual L.A. County Holiday Celebration is presented by the Los Angeles County Board of Supervisors. An example of the county’s commitment to equity and inclusion, this joyous performance provides Angelenos of all ages an opportunity to come together on December 24 to experience and honor the dynamic, rich cultures of Los Angeles. During the free event, many diverse L.A.-based artists — including community-based and professional choirs, music ensembles and dance companies — showcase their talent, artistry and traditions on The Music Center’s iconic Dorothy Chandler Pavilion stage. The three-hour live production features instrumental music, choral music and dance performances.

HISTORY The L.A. County Holiday Celebration was founded in 1959 by the late Kenneth Hahn, who served as supervisor of the Second District of Los Angeles County from 1952-1992. An advocate for the arts, Supervisor Hahn developed the idea of a free daylong concert along the lines of a neighborhood talent show. When pioneering arts leader Dorothy Buffum Chandler asked Supervisor Hahn to support her plan to build an arts complex in Downtown Los Angeles, Hahn agreed, as long as the performing arts center would open its doors to the public for free every Christmas Eve. While The Music Center was under construction, the holiday show was held at the Los Angeles Sports Arena, and, in ensuing years, in the supervisors’ hearing room. Once The Music Center’s Dorothy Chandler Pavilion opened in 1964, the show was held in the new 3,100 seat auditorium, where it has continued to the delight of audiences of all ages for six decades. Over the years, the supervisors from all five county districts have supported the event. Today, the Board of Supervisors includes the Honorable Hilda L. Solis, First District; the Honorable Mark Ridley-Thomas, Second District; the Honorable Sheila Kuehl, Third District; the Honorable Janice Hahn, Fourth District; and the Honorable Kathryn Barger, Fifth District, chair. The show was produced for many years by the Los Angeles County Arts Commission, now known as the Los Angeles County Department of Arts and Culture. There are 15 arts commissioners named by the Board of Supervisors. They include: Tim Dang, Helen Hernandez and Norma Provencio Pichardo (First District); Pamela Bright-Moon, Eric Hanks and Hope Warschaw (Second District); Madeline Di Nonno, Constance Jolcuvar and Rosalind Wyman (Third District); Darnella Davidson,

Eric R. Eisenberg and Liz Schindler Johnson (Fourth District); and Alis Clausen Odenthal, Bettina Korek and Liane Weintraub (Fifth District). While more than 6,000 people traditionally attend the Holiday Celebration at The Music Center, the show reaches all over Los Angeles County and beyond with a live broadcast on PBS SoCal. It repeats on PBS SoCal 1 on December 24 and 25, on PBS SoCal 2 on December 25 and 26 and on KCET December 25. Holiday revelers can also stream the performance live on pbssocal.org and on kcet.org. The show is produced by The Music Center in association with CDK Productions.

SELECTION PROCESS The performers for the Holiday Celebration are selected via an annual public application process, which opens in April and concludes in August. Interested performing groups complete an application and provide video and/or audio footage with their applications. This year, selections were made during an extensive review process that included the arts and culture deputies from each of the five supervisorial districts in Los Angeles County, as well as curatorial, production, marketing, education and operations staff members from The Music Center. Reviewers endeavored to select participants who reflect the diversity of Los Angeles.

HOSTS: SUZANNA GUZMÁN MARISA RAMIREZ SUZANNA GUZMÁN Suzanna Guzmán, mezzo-soprano, is a native of East Los Angeles and one of LA Opera’s original associate artists. She has appeared as a principal soloist with orchestras and opera houses around the world including the Metropolitan Opera, Washington National Opera, Dallas Opera, Opera de Genéve and San Diego Opera, to name a few. In 2019, Guzmán appeared in Ragnar Kjartansson’s epic work Bliss, the 12-hour Mozart marathon, as Madame de la Halterre with Opera Del Wests acclaimed Cendrillon, and continues to hold the record for most female principal roles sung by an artist with LA Opera: over 400 performances. An advocate of arts education, Guzmán regularly performs her one-woman show, Don’t Be Afraid; It’s Just Opera! across the United States and is widely recognized for her mentorship to California students. Her acknowledgements include the 2012 Hispanic Scholarship Foundation’s Mentor of the Year Award, the 2012 Spirit of California Award from the State of California’s Latino Legislative Caucus, the 2013 Mexican American Foundation Award for Woman of the Year and the 2015 Lifetime Achievement Award from the Nederlander Organization for her work in the arts and the community.

Guzmán serves on the USC Thornton School of Music Board of Councilors, on UCLA’s Design for Sharing board, and received her honorary PhD in Music from Occidental College. She acted as host for the Emmy-nominated 59th annual L.A. County Holiday Celebration as well as for the KCET television show Open Call, a showcase for Los Angeles’ vibrant arts community. During her tenure as director of community engagement for the L.A. County High School for the Arts, Guzmán helped develop programs that served over 13,000 K-12 students annually, bringing them to their first symphony, ballet and musical theatre performance. MARISA RAMIREZ Marisa Ramirez is a Los Angeles native who began her career as a model and MTV host. Daytime fans know her well from CBS’ The Young and the Restless and, of course, for her award-winning breakthrough role as Gia Campbell on ABC’s General Hospital. She has starred in multiple primetime television series, most notably as Det. Maria Baez, Danny Reagan’s partner, in the CBS cop drama Blue Bloods. Ramirez played Officer Riley Dunn on ABC’s Body of Proof; Evelyn Santos on ABC’s critically acclaimed Miracles, for which she was nominated for an ALMA and NAACP Award; and Dr. Chloe Artis on the FOX 2009 summer series Mental. When not on the set, Ramirez lends her time and talent to causes important to her including HIV/AIDS, homelessness and animal rescue. She is also an avid kick-boxer and kick-boxing instructor.

GO, WHERE I SEND THEE Arranged by Andre Thomas

JUDAH AND HIS MACCABEES By Karen Hart

THE SECOND STAR TO THE RIGHT By Sammy Cahn & Sammy Fain

SPIRIT OF THE SEASON By Alan Silvestri

UNDER THE HOLLY BOUGH By Charles Mackay

DARO/LAMBANG (CELEBRATION OF THE KINGS) Choreography by Jewel Jackson

Interested in performing in the 61st annual L.A. County Holiday Celebration on December 24, 2020, or know a group or artist who might like to perform? Opportunities are available for anyone who lives in Los Angeles County. Applications will be available in April 2020. Visit holidaycelebration.org in the spring for more details.

Thanks to Performances Magazine for its support of the L.A. County Holiday Celebration.

Celebrating Los Angeles County Every Day of the Year

Illustrations by Down The Street Designs