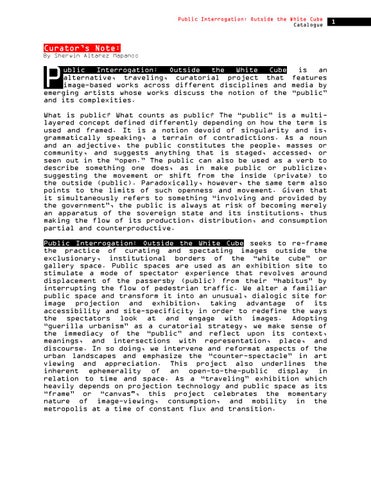 ublic Interrogation: Outside the White Cube is an alternative, traveling, curatorial project that features image-based works across different disciplines and media by emerging artists whose works discuss the notion of the “public” and its complexities. What is public? What counts as public? The “public” is a multilayered concept defined differently depending on how the term is used and framed. It is a notion devoid of singularity and is, grammatically speaking, a terrain of contradictions. As a noun and an adjective, the public constitutes the people, masses or community, and suggests anything that is staged, accessed, or seen out in the “open.” The public can also be used as a verb to describe something one does, as in make public or publicize, suggesting the movement or shift from the inside (private) to the outside (public). Paradoxically, however, the same term also points to the limits of such openness and movement. Given that it simultaneously refers to something “involving and provided by the government”, the public is always at risk of becoming merely an apparatus of the sovereign state and its institutions, thus making the flow of its production, distribution, and consumption partial and counterproductive. Public Interrogation: Outside the White Cube seeks to re-frame the practice of curating and spectating images outside the exclusionary, institutional borders of the “white cube” or gallery space. Public spaces are used as an exhibition site to stimulate a mode of spectator experience that revolves around displacement of the passersby (public) from their “habitus” by interrupting the flow of pedestrian traffic. We alter a familiar public space and transform it into an unusual, dialogic site for image projection and exhibition, taking advantage of its accessibility and site-specificity in order to redefine the ways the spectators look at and engage with images. Adopting “guerilla urbanism” as a curatorial strategy, we make sense of the immediacy of the “public” and reflect upon its context, meanings, and intersections with representation, place, and discourse. In so doing, we intervene and reformat aspects of the urban landscapes and emphasize the “counter-spectacle” in art viewing and appreciation. This project also underlines the inherent ephemerality of an open-to-the-public display in relation to time and space. As a “traveling” exhibition which heavily depends on projection technology and public space as its “frame” or “canvas&quot;, this project celebrates the momentary nature of image-viewing, consumption, and mobility in the metropolis at a time of constant flux and transition.

Public Interrogation: Outside the White Cube is an alternative, traveling, curatorial project that features image-based works across different disciplines and media by emerging artists whose works discuss the notion of the “public” and its complexities. 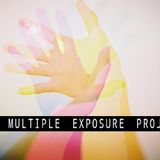