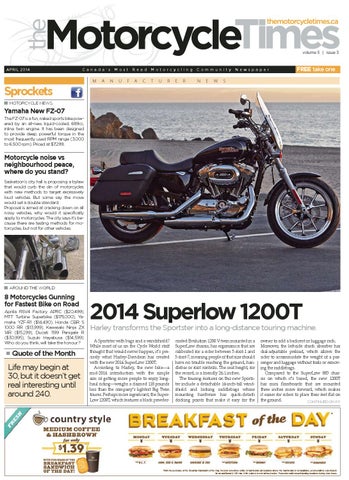 Motorcycle noise vs neighbourhood peace, where do you stand? Saskatoon’s city hall is proposing a bylaw that would curb the din of motorcycles with new methods to target excessively loud vehicles. But some say the move would set a double standard. Proposal is aimed at cracking down on all noisy vehicles, why would it specifically apply to motorcycles. The city says it’s because there are testing methods for motorcycles, but not for other vehicles.

Life may begin at 30, but it doesn’t get real interesting until around 240.

Harley transforms the Sportster into a long-distance touring machine.

A Sportster with bags and a windshield? While most of us on the Cycle World staff thought that would never happen, it’s precisely what Harley-Davidson has created with the new 2014 SuperLow 1200T. According to Harley, the new bike—a mid-2014 introduction with the simple aim of getting more people to enjoy longhaul riding—weighs a claimed 118 pounds less than the company’s lightest Big Twin tourer. Perhaps more significant, the SuperLow 1200T, which features a black powder-

coated Evolution 1200 V-twin mounted in a SuperLow chassis, has ergonomics that are calibrated for a rider between 5-foot-1 and 5-foot-7, meaning people of that size should have no trouble reaching the ground, handlebar or foot controls. The seat height, for the record, is a friendly 26.1 inches. The touring features on this new Sportster include a detachable 14-inch-tall windshield and locking saddlebags whose mounting hardware has quick-detach docking points that make it easy for the

owner to add a backrest or luggage rack. Moreover, the left-side shock absorber has dial-adjustable preload, which allows the rider to accommodate the weight of a passenger and luggage without tools or removing the saddlebags. Compared to the SuperLow 883 chassis on which it’s based, the new 1200T has mini floorboards that are mounted three inches more forward, which makes it easier for riders to place their feet flat on the ground. CONTINUED ON P.3

*With the purchase of the Breakfast Sandwich of the Day, Receive a medium coffee & hashborwn (at locations where the hashbrown is not available, a donut will be substituted) for an additional $1.39 +tax. Offer subject to end without notice. Promotion valid at participating locations during store hours. 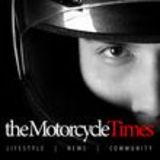