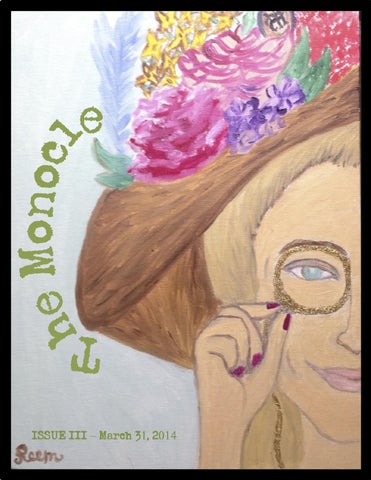 Hello. I am Monocle.

If I am not mistaken, I believe we have a mutual friend –

Brent Michael is an LLM student and litigation attorney from Sydney, Australia. Years of legal practice have waged a war of attrition on the right side of his brain, but it occasionally makes a comeback.

Part III Fall not for Damos’ modesty, For Damos wields a spirit strong; A mortal though this man may be, Good fortune keeps him living long. But things had thus not always been For Captain Damos, born Maltese, At youth, abandoned all his kin, To build a life upon the seas. It’s dinner now, we take our seats, And each of us can’t help but stare As all the breads and salted meats Are laid upon the table bare. “Tonight, my friends, we shall eat well, But save your licking of the lips, For spices, fish, and gold to sell, Awaiting us in Dutchmen’s ships. “What say you, dearest friends of mine? Shall we not brave the headwinds east? We’ll steal those merchants’ gold and wine, And gleefully repeat this feast! A toast to you I do propose For victory in battles near; That all those men who us oppose The Phoebe’s hoisted flag shall fear!”

To victory we raise a toast, Our dishes gleaming lie in wait; Poor Sockeye’s drooling at the roast That’s gently steaming on the plate. I carve a slice to give to him, The tender flesh gives way beneath The cold knife’s fierce unbending will, And parts in two before its teeth.

Poems by: Jerome Ellis Ghent My eyes in the dark Cross the ocean and return, Faded and lowered, Like the stones that led to the water, The porch and its steps that led south. I was always aware when my back Was turned to that row of hidden houses, When I would trespass on the lawn And peer into the marble foyer, submerged In the light that never changed, Cold and noble. When it rained The abandoned house would fill Like an urn in a plaza. She had descended the stairs Leading from the foyer into the earth When the upper rooms were occupied by the air.

On Raphael’s Agony in the Garden The hills will give us enough Space to rest, lain upon the trees Hushed and brave, our leaves, I have prayed in the hills, I have not Known the time, my hands have Felt heavy. I know where the crook Of my arm lies. Where are the sheep? Where are you? The echoes of my prayers Are also asleep. The grass above me And the sky below

Happiness Factors The intense pleasures of exploring Mr. Bentham his "Felicific Calculus" (and that epic T on his forehead).

Seraphim on the Subway BY: Innominate

One icy eve beneath starless sky down subway veins steel boxes fly their cargo clasping together faces dry with street-weathered sighs wrapped around metal in fleshy vines gently, they shift and sway like clothes drying on washing lines. It was here among this creaking crew I saw her standing, fey and fair with almond eyes and ghostly hair but in a moment the doors exhaled bodies pushed and pulled and flailed she was gone, and it would seem but the lingering memory of a dream.