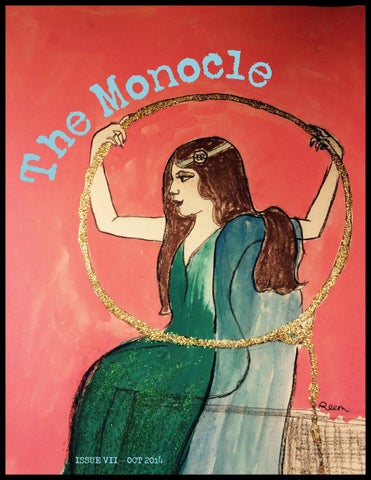 Hello. I am Monocle. If I am not mistaken, I believe we have a mutual friend –

stuff that will really tickle your fancy. (formally called the “Table of Contents”)

As planks extend between the ships, A booming voice now fills the air, Our Captain’s will, like cracking whips, Bears down on Dutchmen in despair. As though she knows that all is done, The Dutchmen's frigate's flags hang lame, A sight her christeners would shun, For there she rests, the Bloodhound tame.

Our Captain stands across a man, Commander Nielsen is his name, Outwitted by the Captain’s plan, His visage stern and cold of shame. Aboard the fluyt the leaders stand, As Nielsen tries to mask concern, Since Damos has the upper hand, In granting them their safe return. Concessions he is forced to make, No words of gripe escape his lips, While we proceed their wealth to take, And leave them just their naked ships. Then Captain Damos turns away, He hands to Nielsen pouches two, “Provisions till a better day, Enough to feed your hungry crew.” His name by this surrender marred, Commander Nielsen—anger rife— Cold vengeance swears for honour scarred, "I'll finish soon that Captain’s life!" And with this oath, he boards the plank, Returning to the Bloodhound's rein, The faces of his crewmen sank, In shame about their pirate-bane.

Torts   Snowfall on the steps, A curse, a fall; Of whom   to make example? Constitutional Law   Read the words with care;   What they mean to you or I Only   the heart knows       Criminal Law   We discussed depraved   and reckless indifference; hearts   I thought of my ex.       Contracts   Butchered, hairy hand holds   all of life’s shattered hope; Can   you name the price?         Civil Procedure If we really could have Choice of Law, maybe I would go with Starfleet’s.

Property Hole under my land you claim because you dug it; sounds like Commie talk.

Legal Methods That boy with nice hair In the row before yours; you should not have kissed him.

The Morningside Muckraker ISSUE VII – The Art of Courage (and Fear) Without Fear, There’s no Courage.