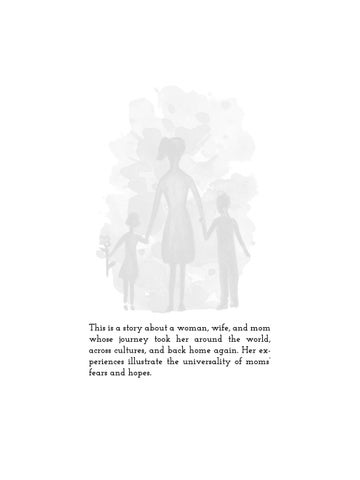 This is a story about a woman, wife, and mom whose journey took her around the world, across cultures, and back home again. Her experiences illustrate the universality of momsâ&amp;#x20AC;&amp;#x2122; fears and hopes.

he idea for the Mom’s Code was actually hatched during my childhood. I just didn’t know it.

When I was in fourth grade, Nick, the grade’s resident bully, threatened

to beat me up after school. I went to a small public elementary school in the suburbs so I wasn’t fight ready. In fact, my siblings and I had kicks and name calling down, but none of us knew how to throw a proper punch. To make matters worse, Nick said his Dobermans would tear my limbs off. We had a cat named Charlie Brown that had killed a mouse once, but I didn’t think he could protect me from the dogs. I was very tiny and quiet at school and had no desire to engage in any brawl. All day, I tried to make myself as unnoticeable as possible, hunching my shoulders and hiding my face. I didn’t answer a single question in class, even though I knew the answers, even when Miss Manson looked right at me. I hoped Nick would forget how much he hated me, and since Nick couldn’t ever remember the weekly spelling words, this was a definite possibility. As the day wore on, I clutched my arms, desperately wanting to keep them. After school, I walked home with my friend Angie to play at her house. I checked repeatedly for my would-be stalker but there was no sign of Nick. When I saw Angie’s house, I thought that I was safe. I exhaled and asked

Angie if she liked unicorns. I expressed my dislike of unicorns and the color pink. She agreed. We were best friends after all and decided we would be roommates in college. All of a sudden I heard, “You’re dead meat and you look like a circus midget!” Nick. Panic swirled inside me like a wild, mean storm. I’d never seen a circus midget, but I knew it wasn’t good. Angie bolted into her house, screaming. I stood there, my feet like roots stuck in the ground. My hair stood on end and I slowly turned to see Nick charge at me like an unsteady rhino. I swung my Barbie lunchbox with all the strength my 50-pound body possessed. The lunchbox made a terrible noise as it met the side of Nick’s face. He went down. Angie yelled out her door. “I called my Mom at work. She says you’re a giant, stupid coward. She’s on her way home right now!” I stood still as a statue, watching Nick stagger to his feet. “Tomorrow,” he hissed, “I’m really gonna kill you geek princess. I’m bringing the dogs.” Then he ran away. “He’s really scary,” Angie said anxiously. “And such a meanie. You better tell your mom.” “I think I’ll go home.” My hands shook. I was afraid of Nick and his dogs, afraid my parents would be upset, afraid I would get in trouble at school. I started running. I imagined Nick behind every bush, ready to pounce on me as I passed, reeling me in by pulling my hair, and whistling for his vicious dogs. My mom called out as I arrived home. Words trapped in my throat, I trudged in, tears streaming down my face. “I got into a fight.”

3 My mom crossed to the mudroom in a flash. “What? You? A fight! What happened?” Frantic words tumbled out of me as I told her about my horror story of a day. “Why you?” “Because Miss Manson posted everyone’s reading stars and I have the most. Plus I’m an annoying flea, and I should just die and make the world a better place.” I stated this obvious, highly upsetting, fact. My mom gasped. “He probably has a crush on you. Boys act silly when they like girls.” She made light of things to calm me down but her eyebrows were in a ‘v’ so I knew she was upset. I whispered, “He’s promised to really kill me tomorrow. He’s bringing his giant attack dogs. It’s the last day of my life.” My whole body was wracked by uncontrollable sobs, relieved I was with my mom but deeply afraid of what lay ahead. My mom wiped all the fluids from my face with her bare hand. “I can tell you with 100% certainty he will never lay a hand on you. Do you understand? Not one hand. Everything is okay.” I felt immense, blinding trust in her. “Plus, I’m making your favorite—spaghetti and meatballs, just in case it happens to be your last meal…” She smiled. But I noticed she drank two of her amber drinks that we weren’t allowed to touch. Late into the night, I was anxious and lay awake. Every shadow looked like a scary beast. I could see a werewolf in the tree branch outside my window. My sister’s breathing sounded like a hungry lion. I wanted to run to my mom and tell her even her meatballs didn’t comfort me and I didn’t

want to die or live without my arms! But I knew a demon was under the bed, waiting to grab me by my ankles and pull me under, so I lay still, eyes wide open, frozen with unshakable fear. The next day, my mom drove my siblings and I to school. She parked and trailed behind us, trying to be covert. She appeared casual, but she was in vigilant mom mode. When I reached the front door of the school, I looked back at her. She nodded slowly and I walked in, expecting the worst. I sat down and tried not to look at Nick’s black and blue jawline. Miss Hennessey, the school receptionist, walked into our class and asked Nick and I to come to the office. I had never gone to the office for being ‘in trouble’. The hallway was long and empty. No one said a word, and I marked the passing seconds to the click of Miss Hennessey’s shoes with the clunky square heels. My mom and another woman sat with Principal Wente. My mom wore her serious face and her left leg jiggled up and down. Tears pushed their way out as I walked in. The other woman’s mouth opened in an ‘O’. My mom pointed at me and mouthed, “Stop crying.” “Nicholas,” Principal Wente said, “your mother called me this morning to say she bullied you. Her? This girl? What really happened here?” Nick started to say something, and his mother cut him off. “Nicholas Harper, I want the truth right now. Did you follow this little girl home and threaten to beat her up? You told me a bully hit you in the face.” She appeared authentically under-informed and mad about it. “Well…she hit me with her giant plastic Barbie weapon,” Nick said nervously.

5 Nick’s mom leaned toward me. “Honey, I’m really sorry. You’re like a little feather—Nicholas must have lost his mind.” “I’m sorry I hit Nick with the lunchbox,” I said. “I’m afraid the Dobermans will attack me and I really need to keep my arms.” Nick’s mom squinted. “What Dobermans? Why would anyone lose an arm?” Nick cringed. “Well, we have a Golden named Raffles. I guess he doesn’t bite.” My nightmare ended. Nick never looked in my direction again— until he asked me to be his girlfriend in seventh grade. In my child’s mind I thought this is the essence of what moms do. While we perform on childhood’s stage, moms are behind the curtain, ready to leap out and help us when we need it. My mom didn’t seem angry with Nick or his mom. And Nick’s mom didn’t seem defensive. We met face-to-face, sorted out the truth, and moved on to recess. Years later, my mom told me she was spitting mad and had called every one of her friends to ask about this family, this boy. But it was invisible to me. I grew up believing that moms are protectors—they are the centers of our home, they are the anchors of our childhoods, they are a constant light in our life. And for the most part, moms are the nicest people on the planet. Right? Well now that I’m grown and have kids of my own, I realize it’s not so simple.

A set of guiding principles that will help us navigate the rocky waters of raising children.

A path for moms to find their way, to keep their balance and their light in our turbulent modern world.

This is a story about a woman, wife, and mom whose journey took her around the world, across cultures, and back home again. Her experiences illustrate the universality of moms’ fears and hopes. The characters and events are fictional, but loosely based on real stories.